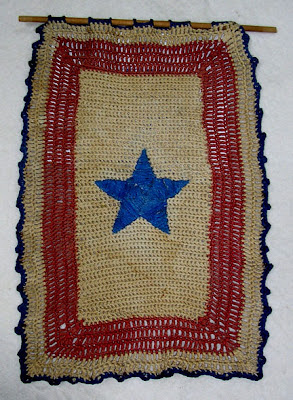 In the late summer of 1942 this crocheted flag arrived at the home of James L. Fecht in Mexico, Missouri. The little banner was done in Minot, North Dakota by Leona Weaver Crites in honor of her grandson's service in the United State Marine Corps.

The flag was among the possessions of Mildred Fecht when she died. Her daughter Genevieve sent it from Washington State in November 2003 to her brother Jim who was living in Tarzana, California. On the back of the flag was pinned a note from Genevieve saying" "I do remember the hanging. I would look at it and think of you as well did in that house for over 3 years. ... Oh how I hoped and prayed that we wouldn't have to change the color of that star. You came home to us !!! What a great time it was." (The center star of stars were blue if the person in the service was living, and gold if he or she had died for their country.)

Genevieve Rebbe wrote further: "Thank you for being my hero, thank you for writing v. mails to me while you were gone. Thank you for the lovely Marine locket you gave me and I still have. We are so lucky you lived thru that miserable war."

Jim entrusted the precious little flag to The Museum of the San Fernando Valley in 2007.
Posted by Gerald R. Fecht at 4:01 PM

My heart is full of memories of Uncle Jim and my Grandmother Mildred when I see that flag. Have only seen it once or twice, Grandmother always told the story of Jims home coming when she had it out.