The Who, What, Where, When and especially the Why...

We are so happy that you would like to participate. Please know that this is NOT a competition. This is an opportunity to show your short film in a theater and meet professional animators from film, TV and video games.

Produced by the Public Art Initiative, a program of The Museum of the San Fernando Valley along with The Quaran Teens Network.

Submissions no longer than five (5) minutes in length.

Registration form must be filled out with names of youth filmmaker and signed by parent and or guardian.

(XST) Southwest corner of Nordhoff St. and Wilbur Ave. on the historic grounds of the Rancho Cordillera del Norte.

There will be games, fun, food, raffle prizes and much more! 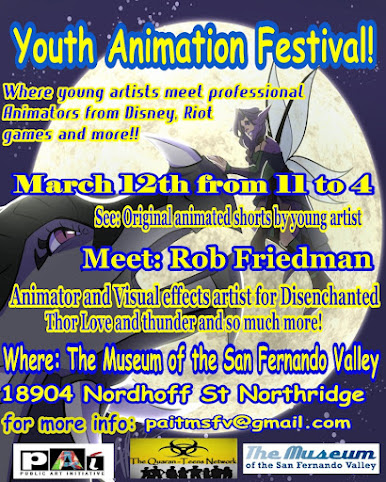 Posted by The Museum SFV at 4:45 AM No comments:
Email ThisBlogThis!Share to TwitterShare to FacebookShare to Pinterest

Cindy Williams, valley girl, who played along side Penny Marshall on Laverne & Shirley,” has died at age 75

Cindy Williams, who played along side Penny Marshall on the famous sitcom Laverne & Shirley,” has died. She was 75.

Williams died in Los Angeles on January 25, 2023 after a brief illness, her children, Zak and Emily Hudson. 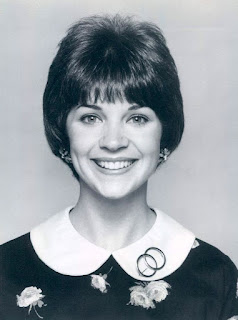 She had quite a career in television and film.

After college, Williams began her professional career by landing national commercials, which included Foster Grant sunglasses and TWA. Her first roles in television, among others, were on Room 222, Nanny and the Professor, and Love, American Style.

Williams accompanied an actor-friend from Los Angeles City College who needed a scene partner for the audition and was also accepted at The Actors Studio West, but rarely attended due to acting commitments. Williams picked up important film roles early in her career: George Cukor's Travels with My Aunt (1972); as Laurie Henderson, Ron Howard's character's high school sweetheart in George Lucas's American Graffiti (1973) for which she earned a BAFTA nomination as Best Supporting Actress; and Francis Ford Coppola's The Conversation (1974). She auditioned along with thousands of others, for Lucas's Star Wars for the role of Princess Leia, but Leia was ultimately played by Carrie Fisher because Lucas wished to cast unknowns, as in American Graffiti.

Williams met Penny Marshall, first on a double date, and later at Francis Ford Coppola’s Zoetrope company. The company hired them as comedy writers, because "they wanted two women" on a prospective TV spoof for the Bicentennial. While the two were writing for Zoetrope, Penny Marshall's brother, Garry Marshall, called to ask if they would like to make an appearance on an episode of Happy Days, a television series he produced.

In 1975, Williams was cast as a fun-loving brewery bottle capper, Shirley Feeney, in an episode of Happy Days with Penny who played her best friend and roommate Laverne De Fazio. The girls were cast as "sure-thing" dates of Richie and Fonzie (Henry Winkler). Their appearance proved so popular that Garry Marshall, commissioned a spin-off series for the characters of Shirley and Laverne.

Williams continued her role on the very successful Laverne & Shirley series from 1976 until 1982. At one point during its run, the series was the number one rated show on television. Williams was praised for her portrayal of Shirley Feeney.

She left the show after the second episode of the show's eighth and what would become its final season, after she became pregnant with her first child. The show's various producers were not enthusiastic that Williams was pregnant, as her character Shirley was not pregnant.

The success of the TV series led to a short-lived Saturday morning animated series Laverne & Shirley in the Army (1981–82), created by Hanna-Barbera.

Read more on Cindy Williams with these links:

Posted by The Museum SFV at 11:01 PM No comments:
Email ThisBlogThis!Share to TwitterShare to FacebookShare to Pinterest

Invitation to attend  - A reading of the full-length play -  How High the Moon by Barbara Nell Berry -  set in the San Fernando Valley on July 4th, 1952.  Directed by Asaad Kelada.

Bring your memories of the San Fernando Valley to share after the reading. 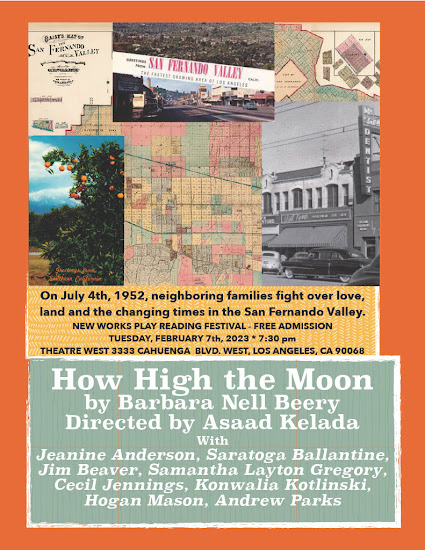 Extended to The Museum of the San Fernando Valley Community.

COVID POLICY: Masks must be worn at all times in the theatre.

Posted by The Museum SFV at 9:50 PM No comments:
Email ThisBlogThis!Share to TwitterShare to FacebookShare to Pinterest

Born in Los Angeles, White attended San Fernando High where he was an all-star football player and a state-champion 330-yard hurdler. As a 1975 senior, he played fullback in a wishbone offense, rushing for 1,118 yards and 14 touchdowns while averaging 9.4 yards a carry.

White signed with USC in the spring of 1976 and made an immediate impact as a true freshman the following fall, rushing for a school freshman-record 858 yards and 10 touchdowns as the oft-used backup to Heisman runner up and first-pick-in-the-draft Ricky Bell.

As a sophomore, White took over the starting tailback spot and gained 1,478 yards. He improved as a junior, earned All-American honors while rushing for 1,760 yards and 13 touchdowns as the Trojans finished 12-1 and won a share of the national title.

White entered the 1979 season as one of the Heisman front runners and despite missing about a game-and-a-half due to injury, he led the nation in rushing with 1,803 yards and 18 touchdowns as the Trojans finished 10-0-1 on the year. He tallied four 200-yard efforts during the regular season and had three more game where he rushed for at least 185. In the last 10 games of the season, he averaged 201 yards per game.

As a result, the 5-10, 190-pounder won the Heisman handily over returning Heisman winner Billy Sims of Oklahoma.

White then capped his season with one of the great performances in bowl history, rushing for 247 yards on 39 carries in a dramatic 17-16 victory over Ohio State in the Rose Bowl. His diving touchdown with 1:32 to play was the deciding score.

In his regular season career, White rushed for 5,598 yards and scored 53 touchdowns. The 1978 and 1979 Rose Bowl Player of the Game, he is a member of the Rose Bowl Hall of Fame.

White graduated with a degree in Speech Communications. Drafted by the Cleveland Browns in 1980 with the 27th pick of the first round, he also played for the LA Rams, for whom he won the NFL rushing title in 1987.

White was elected to the National Football Foundation and College Hall of Fame in 1996. 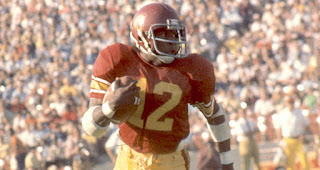 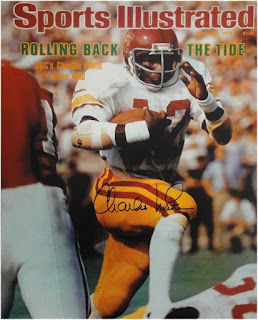 Posted by The Museum SFV at 9:42 PM No comments:
Email ThisBlogThis!Share to TwitterShare to FacebookShare to Pinterest

On Sunday, February 19th, the Pacoima Historical Society is collaborating with The

Museum of the San Fernando Valley to present a Black History Month celebration.

history of African Americans in the San Fernando Valley.

The event will feature music from local bands and artists, with DJ/MC Eric Stewart

hosting the festivities. There will be large photo exhibits, vendors, and food. It promises

to be a fun and enlightening time for all.

Guest speakers also include USC Football legend Anthony Davis*, who was an All-

American at San Fernando High School and member of the 1965 North Valley Broncos,

the first all-Black baseball team to advance to the Little League World Series.

In addition, author and historian Crystal Jackson will deliver an in-depth presentation on

the untold African American history of the San Fernando Valley. She will also be signing

copies of her new book “The Marilyn Monroe Connection,” which reveals the Hollywood

* Scheduled to attend and participate in the event.

Where: The Museum SFV

(On the grounds of the historic Rancho Cordillera del Norte)

RSVP:  HERE on Eventbrite - to let us know you are attending (and how many people)

Parking:   FREE - pull in the gates of The Rancho - 9015 Wilbur Ave. and you will be directed to parking areas.

For more information on event and entertainment, please contact:
Eric Stuart, The Museum of the SFV, 818-347-9665 or themuseumsfv@gmail.com,

Thank you -please bring family members, friends and colleagues to this special event. 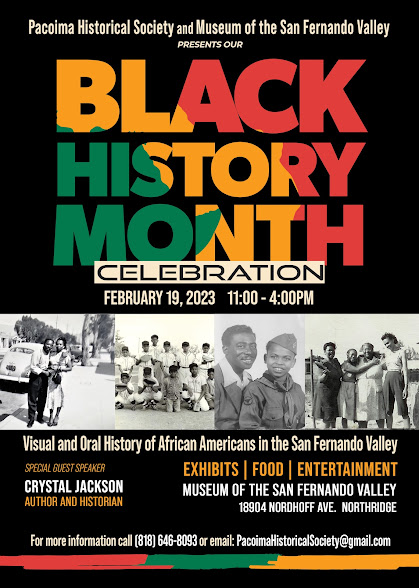 Posted by The Museum SFV at 1:56 AM No comments:
Email ThisBlogThis!Share to TwitterShare to FacebookShare to Pinterest
Older Posts Home
Subscribe to: Posts (Atom)

CURRENT EXHIBITS at YOUR Museum SFV
Ritchie Valens (thru 3/31/23), Coming Home from WWII, Then and Now, Phi Delta Psi & Gerald Fecht, Ph.D., Museum Founder tribute, Unmasking the SFV - An art exhibit and fundraiser (ongoing)
Coming Home: WWII Stories
Then and Now - fun historic review of intersections, businesses and stores from yesteryear
Aviation in the SFV
UPCOMING EVENTS:
Artist Speaker Series to be held normally on 2nd Saturday of each month.
Live events or someties Zoom presentation; RSVP on Eventbrite; Zoom link will be provided upon rsvp. email with info at themuseumsfv(at)gmail(com).
Suggested donation for Artist Speaker Series is $10/person and is appreciated to support art, valley-based artists and The Museum SFV art programming.
--- --- ---
The Museum SFV ongoing History of Speaker Series, will be offered on 4th Saturdays throughout the year.
Live events; RSVP on Eventbrite; email with info at themuseumsfv(at)gmail(com).
Suggested donation of $10/person is appreciated to support History of Speaker Series and cultural and The Museum SFV programming.