Jimmy Dorsey led one of America's great stage orchestra in the era of the Big Bands. The Jimmy Dorsey band had fans throughout the world and made the careers of hundreds of singers and musicians. The following photographs are courtesy of Ralph Muzzillo Jr. and are from his father's personal collection. Ralph Muzzillo Sr. was one of the great trumpet players of his time. He lived much of his life in Encino and died in Tarzana. 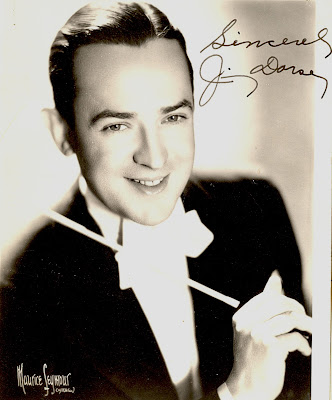 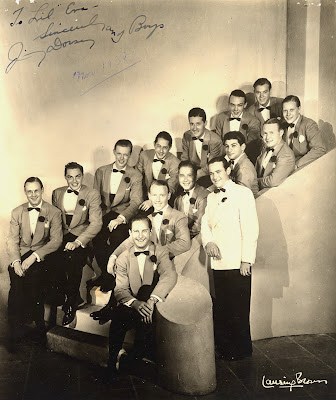 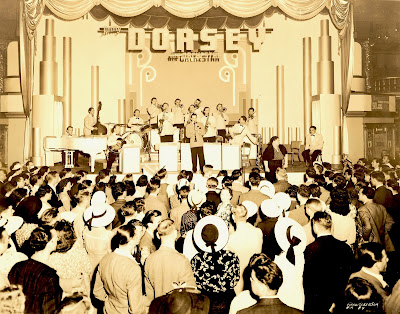 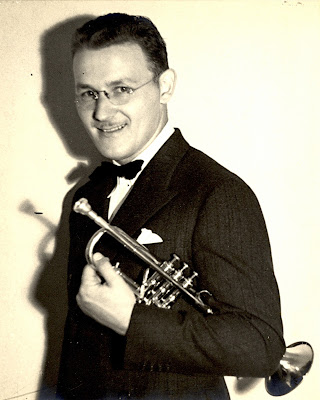 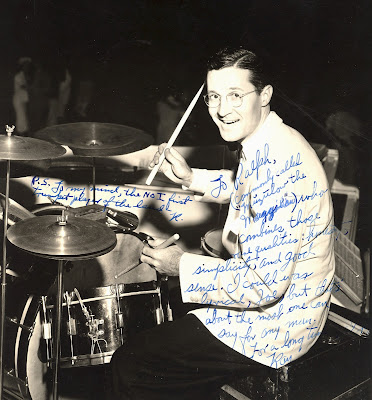 "To Ralph (commonly called 'Muzulow - Muggilaw' who combines the qualities of simplicity, and good sense.  I could was lyrical, Joe, but that's about the most one can say for any man. For a long time, I hope Ray"  "P.S. To my friend, the No. 1 first trumpet player in the band. R.K." 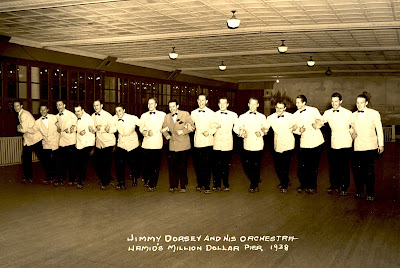 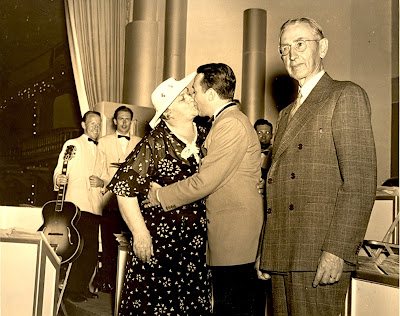 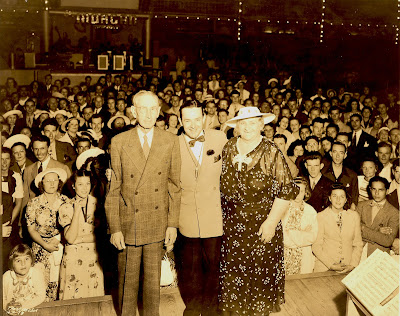 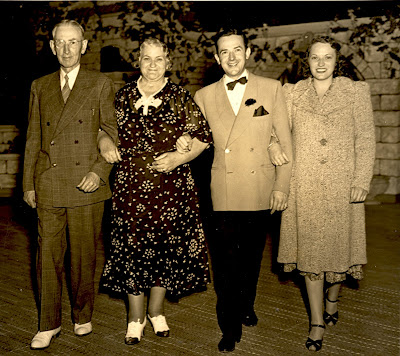 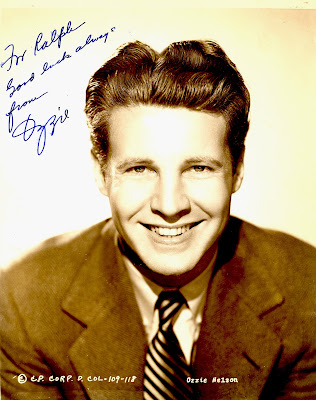 Born Oswald George Nelson, Ozzie Nelson was destined to become a major big-band era band leader. Ozzie married his lead singer Harriett Hillard, who with their sons David and Ricky formed one of American radio and television's most important situation comedies, the Adventures of Ozzie and Harriett Show.

ENCINO'S ALVINO REY AND HIS ORCHESTRA


Typical of big band leaders of the 1930s and 40s, Alvino Rey began his career by playing in other bands. He worked with Freddy Martin and Russ Morgan, and for seven years (1932-1939) played in the Horace Heidt's Musical Knights. (Horace Heidt lived and worked from Sherman Oaks.)
He married Luise King (one of the King Sisters.) 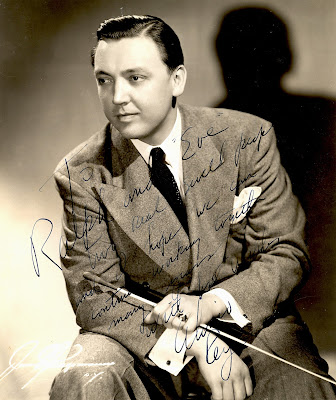 Alvino Rey - Alvin McBurney    1908 - 2004
Autographed photograph - Loaned to The Museum of the San Fernando Valley by Ralph F. Muzzillo Jr. 2013 -   (click on images to enlarge them.)
"To Ralph and Eve - two real swell people. I hope we can continue working together many years. With Best Wishes, Alvino Rey."

Alvino Rey was fascinated by electronics, developing musical instruments and working with amateur radio. He helped develop the first electronic guitar for the Gibson Corporation.  In 1939 Alvino Rey became the musical director for radio KHJ in Los Angeles. That same year he created the Alvino Rey orchestra.Rey lived at 5001 Woodley Avenue in Encino.
During World War II Rey worked for the Lockheed Aircraft Company in Burbank. In 1944, he joined the US Navy. Rey's 1940, pre-war song "My Buddy" was one of the most important sons during the war.
c 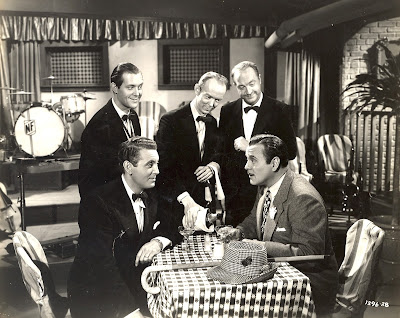 
Jeff Pirtle of NBS - Universal reminds The Museum Community that Leo Carrillo, a direct descendent of Jose' Antonio Carrillo was also in this movies. Jose' played a major role in the Treaty of Cahuenga signed in the San Fernando Valley. 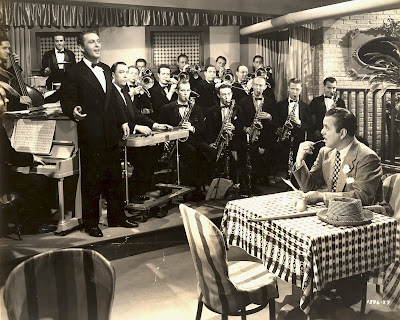 Alvino Rey and his orchestra, play themselves in the Universal film, Larceny With Music 1943.
Photo courtesy of Ralph F. Muzzillo Jr. 2013. Ralph Muzzillo Sr. was a trumpeter in this orchestra.

Joan Marsh began her film career at the tender age of two. Her father, who worked as a cinematographer for Universal Pictures secured her role in the Universal film "Hearts Aflame" in 1915. After Hearts, Joan did lots of baby roles.
As a young adult, she lived off and on in the San Fernando Valley while singing with Bing Crosby in King of Jazz. In 1934, she appeared with W.C. Fields as his daughter inf "You're Telling Me." 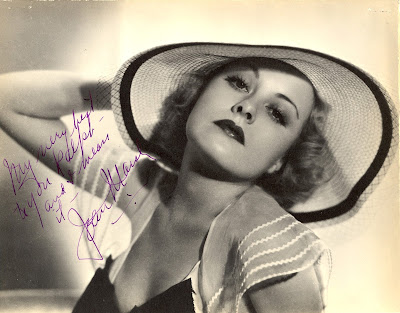 CLARK DENNIS WAS HEART THROB SINGER IN THE 1930s

Clark Dennis died at the age of 83 in Estes Park, Colorado. He began his show business career singing with America's pin up girl Betty Grable in the Ben Pollack Orchestra. Dennis and Grable remained friends when they both lived in the San Fernando Valley. Clark Dennis was known world wide for his renditions of "Spanish Granada" and "Peg O' My Heart." He got his start in Chicago in the 1930s, where he met and became life long friends with the Encino/Tarzana trumpeter Ralph F. Muzzillo. 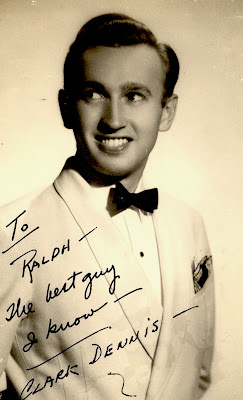 After his singing career was over, Clark Dennis made his living running an entertainment industry bookstore on Ventura Boulevard.

Harriet Nelson, of the famous Ozzie and Harriet family, lived much of her life in Studio City. Harriet was born in 1909 in Des Moines, Iowa and died in Southern California in 1991. She began her professional life as a singer in the Ozzie Nelson band, and went on to become a world famous television star. 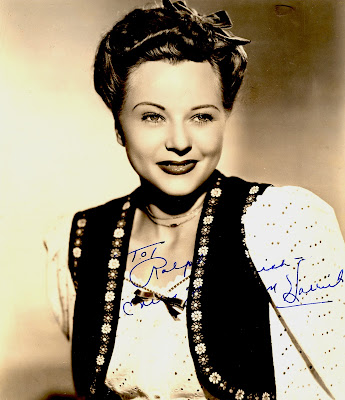 Harriet Hilliard featured with Ozzie Nelson and his Orchestra
In the collection of Ralph F. Muzzillo Sr.


Recently, The Museum of the San Fernando Valley began to receive elements of the Ralph F. Muzzillo Sr., collection of Big Band Era artifacts and memorabilia. Mr. Muzzillo was a trumpeter for some of the most important bands of the 1930s and 40s. He and his family lived in Tarzana. The following images of the King Sisters, who lived and worked out of the Valley, are an example of the photographs in Mr. Muzzillo's collection. 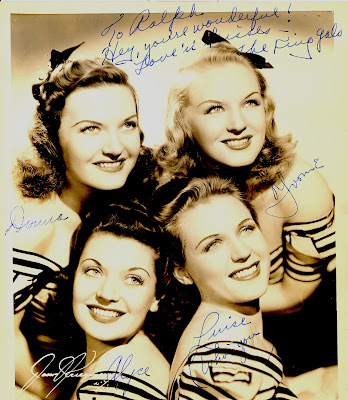 Strelitzer lived from 1896 to 1981. He came to Southern California in 1937. He taught in many local institutions including Los Angeles City College.
Dr. Richard Lert, who conducted this Carmin, lived from 1885 to 1980. He brought his wife and young sons to California in 1932, where he became the music director of the Pasadena Symphony Orchesta. He was associated with the American Music Theatre's summer program. 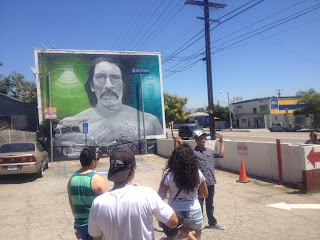 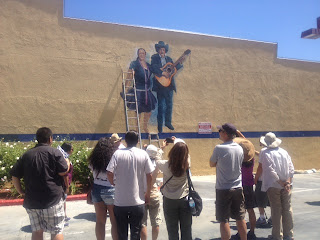 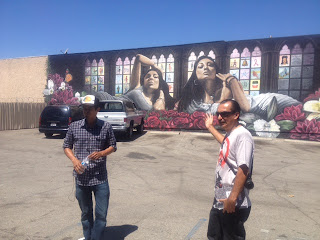 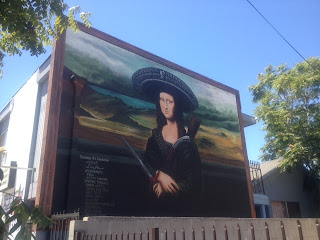 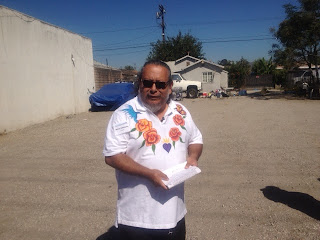