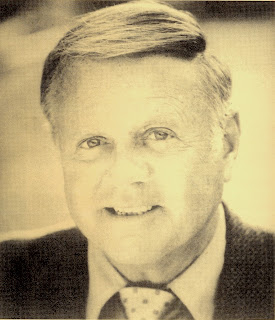 Sherman Oaks actor and entrepreneur Dick Van Patten has led an amazing life. He has been in 27 Broadway plays, starred in six television series and sixteen motion pictures. Van Patten helped to bring Natural Balance Pet Foods to the marketplace.


The 5,000-square-foot home of Leslie Coombs Brand are being brought back to life as the Brand Library & Art Center. It has been occupied since 1956. The $9.5 million upgrade is more than halfway complete and  the library's reopening slated for around spring of 2014.

The graceful origins of a historic Glendale landmark are being re-created as part of an extensive facelift worthy of any Hollywood star.

Elaborate Victorian-era stencils of cherubs and birds. The rich color palette of a bygone era. Tiffany leaded-glass windows. And an ornamental pedestal embellished with the monogram of the wealthy Glendale pioneer who built the hilltop mansion.

Read more about it:

Posted by The Museum SFV at 4:26 PM No comments:
Email ThisBlogThis!Share to TwitterShare to FacebookShare to Pinterest
Labels: BRAND LIBRARY, Glendale


Art's Deli and Restaurant became a hotbed for the entertainment industry as well as a neighborhood institution.

Art Ginsburg was quoted one time that the deli's huge photos of pastrami and corned beef platters were "Jewish pornography."

Posted by The Museum SFV at 4:15 PM No comments:
Email ThisBlogThis!Share to TwitterShare to FacebookShare to Pinterest
Labels: ART'S DELI, GINSBURG Art

EARLY IMAGES OF THE HISTORICAL MUSEUM AT VALLEY COLLEGE

Among recent gifts to The Museum of the San Fernando Valley from Barbara Silva are these images of the founding of the historical museum at Los Angeles Valley College in July 1976. The museum has been recently moved to the second floor of the new library of the college. 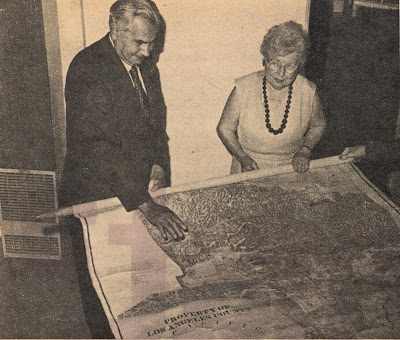 Los Angeles Herald Express July 25, 1976.  " Old photo map of San Fernando Valley, being examined by Francisco Avila and Mrs. Stanley Petit, is among the 1000 pictures and maps of the Valley on exhibit in Los Angeles Valley College historical museum." 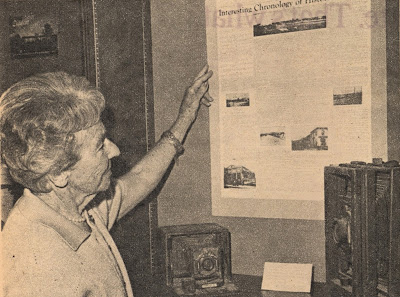 "Also on display are old newspapers with articles relating to the Valley, and news cameras used in photographing its happenings." 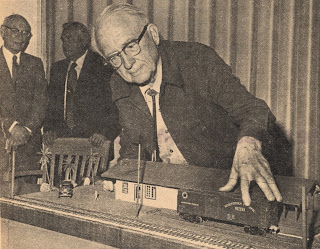 "Chester Tayloe, president of the museum board of directors, has made several scale model railroad displays for exhibit."

The historical museum at L.A. Valley College was formed in 1974 by professor of history Dr. James Dodson. Over the years, Austin Conover a member of the museum's board evolved into the director of the museum. "The museum was "first housed in the college's library, it later was moved to ... Bungalow 15 on campus, which happens to be the structure used as an office building when the college opened 25 years ago (1951)."
In 1976, Francisco Avila was vice president and Dr. Dallas Livingston-Little was secretary-treasurer.


The Museum of the San Fernando Valley grew out of the historical museum at Valley College.

THE GREAT CONDUCTOR AND CONDUCTOR HENRY MANCINI LIVED IN NORTHRIDGE


One of the most important conductors, composer and arrangers of the 1980s and '90s was the great Henry Mancini. His music for the Pink Panther, television's Peter Gunn series and the great compositions for Moon River and Days of Wine and Roses still have an important place in American music 20 years after his death.  "Henry" Enrico Mancini lived with his family in the San Fernando Valley community of Northridge. 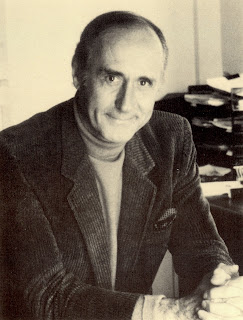 STACY KEACH AT THE ONSET OF HIS CAREER

37 years ago the terrific actor Stacy Keach was well into his career as a stage, film and television performer. Keach is a June 1959 graduate of Van Nuys High School, where he served as president of his class.


When I was a student at USC, I worked on the political campaign of Illinois Senator Adlai E. Stevenson. As the Democratic convention approached in the Los Angeles Sports Arena, all of us began to see the enthusiasm for Massachusetts Senator John F. Kennedy rising. When President Kennedy won the nomination, I was among the students who invited him to speak at the University. He accepted and today on the steps of the Doheny Library there is bronze plaque marking the occasion.
Kennedy began his speech by calling the University of Southern California, the "Harvard of the West." By the end of the speech, there were discarded Nixon buttons all over the lawn.  About a month later President Nixon, then Governor of California, spoke on the campus. There were no Kennedy buttons on the lawn.
On election day, my mainly Republican fraternity brothers were tying me up in the cellar of the SAE house to keep me from voting, when I showed them my absentee ballot stub in my wallet. I had already voted.
The Museum of the San Fernando Valley collects and preserves, and will eventually exhibit political memorabilia (local, state and national). 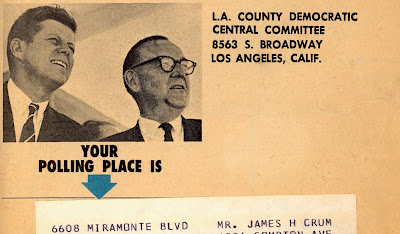 For a century, movie makers used the ranches and rocky outcroppings of the San Fernando Valley, to film America's seemingly insatiable desire for cowboy films. Here are six of the cowboy stars of the era. 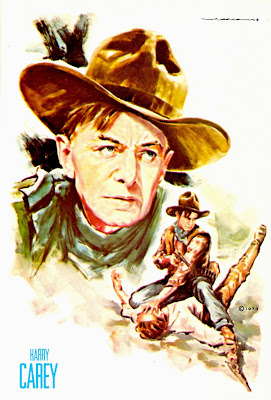 Director John Ford's first major cowboy star was Harry Carey. A Universal Pictures' star, Carey had a small ranch in Reseda where other western film stars hung out. They called the ranch Valleywood.

Cowboy stars postcards - Gift to The Museum of the San Fernando Valley from Gary Fredburg 2013. 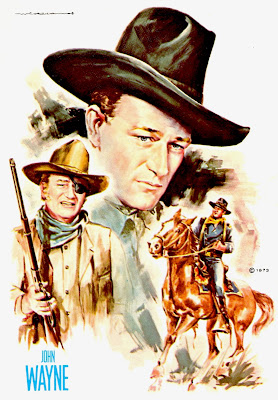 John Wayne
Before he was John Wayne the movie star and American icon, he was in 1925 Marion Morrison a high school football player for Glendale High School. Later, while playing football for the USC Trojans, Morrison was "discovered" while working as an extra for a motion picture. With his name changed to John Wayne, he lived for many years in the Valley community of Encino. 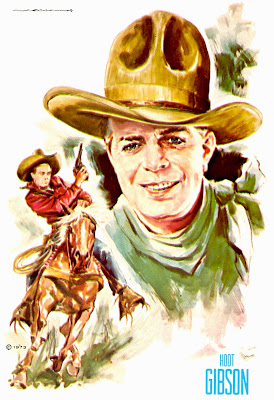 Before he got into the movie business, silent film star Hoot Gibson was a genuine cowboy. He was a great horseback rider and stunt rider. Hoot, marginally, made it into talking movies and worked in "B" pictures for Universal Studios. Gibson died in Woodland Hills. 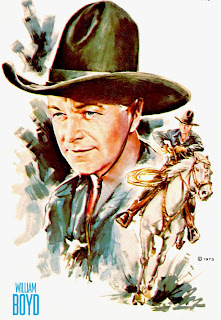 For over a dozen years, children eagerly awaited the latest serial at the end of Saturday's main feature film. Since the short films usually ended with Hop-a-Long Cassidy riding to the rescue of someone in dire peril, they were dubbed "cliff-hangers."  William Boyd's famous Hop-a-Long Cassidy was so popular that the new licensed products business made a fortune on Hop-a-Long lunch boxes, cap guns, decoder rings, hats and even Hallow'een costumes. Quite naturally, The Museum of the San Fernando Valley collects these kids-treasures as examples of Valley culture and the Spirit of the Times. Bill Boyd is buried in Forest Lawn cemetery in Glendale. 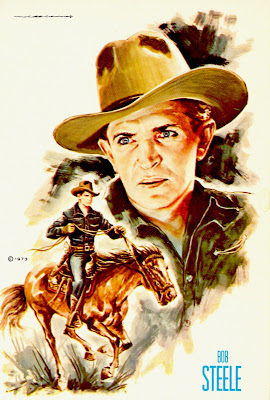 Bob Steele was not only a cowboy film hero, but the "heart thob" of many a teenaged girl. A graduate of Glendale High School, Steele became a star of Republic Pictures, bought a ranch in the Valley and is buried in Forest Lawn Hollywood Hills overlooking Burbank. 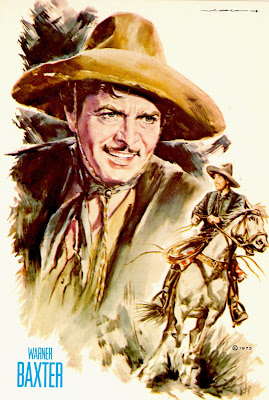 Warner Baxter
One of the most successful actors of his era, Warner Baxter made hundreds of movies, from the silent era to talking films. At the final years of his career, Baxter became famous to yet another generation by his portrayal of the Mexican cowboy hero, the Cisco Kid. Warner Baxter is buried in Glendale's Forest Lawn cemetery.

WHEN THE SKIES WERE FRIENDLY

When Arlene, a newly graduated North Hollyood High School senior took his airplane flight in 1958, she was impressed with the special service that she experienced. There were free beverages, a gratis in-flight meal (see the menu below), and no cost luggage transportation. On request American Airlines provided a deck of playing cards, stationary and writing pens. Children were provided with special toy pilot wings. People smoked cigarettes in waiting lounges and even in the rear of the air plane. And, Arlene didn't have to get to the airport early to be searched. 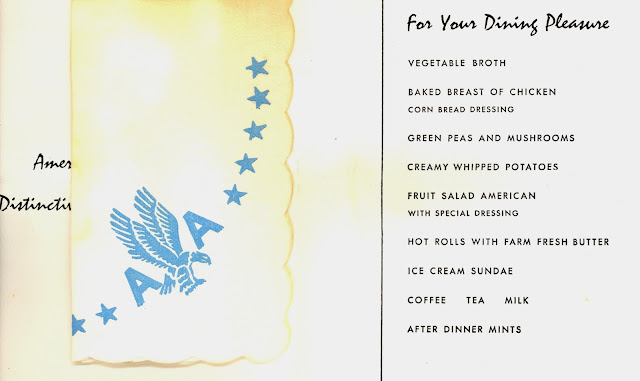 A VIEW FROM MULHOLLAND DRIVE

I don't know about you, but I love old postcard, often romanticised, views of the San Fernando Valley. Skies are always crystal blue, streets are free from congestion, and foliage bright shades of green. Guess this is where the old saying "picture - postcard - perfect" comes from. 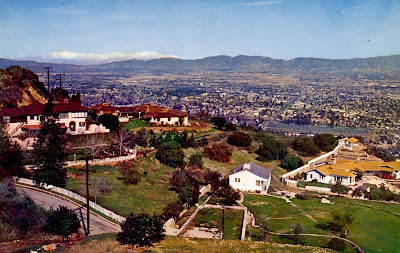 Tracing the wall north aside the orange-roofed houses, there is a blue-gray strip going from right to left. Any idea of where and what this is?
Posted by Gerald R. Fecht at 12:20 PM No comments:
Email ThisBlogThis!Share to TwitterShare to FacebookShare to Pinterest
Labels: MULHOLLAND Drive

HOPE FOR AN AIRPORT OF MANY NAMES. 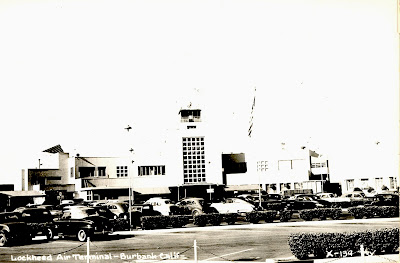 
Any minute now my daughter-in-law will be delivering an heir to the Fecht family kingdom. So our family decided that we should follow the San Fernando Valley tradition of having "The The Salad" at the Caioti Pizza Cafe in Studio City. The six of us stuffed ourselves on an enormous pepperoni pizza and watched as our Rebecca added her comments to the cafe's "Labor Journal." (By the way the special salad is good!)  My grandson, Jake had a "Bubble Up" soft drink from a ice cold bottle. I didn't know that "Bubble Up" was still on the market.
Caioti Pizza Cafe
4346 Tujunga Avenue, Studio City, CA 91604
(818) 761-3588

After our lunch, my family explored the great little shops along Tujunga Avenue. To our delight we encountered Jenna Stewart at her new "Simply Succulent" store. This shop is worth driving to the Tujunga Village district, just for the pure joy of the experience. 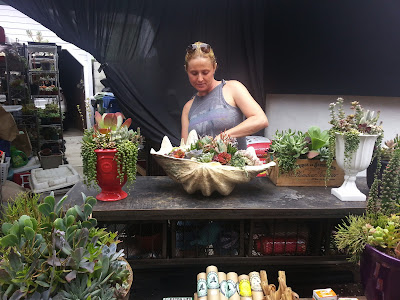 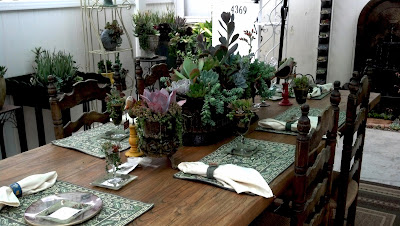 Some event planners arrange for cocktail parties on site at Simply Succulent
(click on images to enlarge them.) 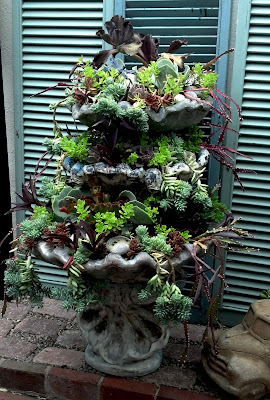 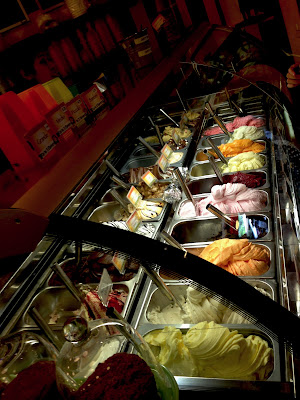 Because of the hot weather, we were "forced" to stop to try out a gelao. My was a grapefruit ice - was absolutely terrific.