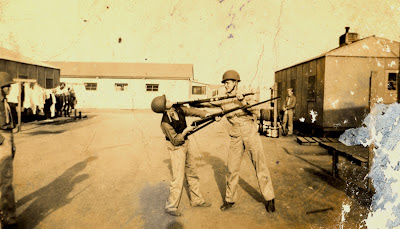 Jim Fecht (left), "Hab" Garrison, Lee Moon and "Dago" 1942
Among the many artifacts given to The Museum of the San Fernando Valley in memory of James Fecht were these two photographs taken in Camp Elliot, California in 1942. These damaged photographs, enhanced slightly here for clarity, were taken shortly before these members of the 3rd Marine Division were deployed from San Diego to the war in the Pacific. The photographs were processed by the Sauer Studio in Greenville, Mississipi. The photos were among the few items carried by James Fecht during his time in the military.
As the war progressed, Jim Fecht said that he lost so many of his buddies from boot camp and from Camp Elliot that he would not intentionally make new friends. The pain of losing them was too great.
Posted by Gerald R. Fecht at 4:12 PM