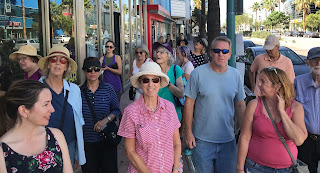 Meet a few minutes before 2:00 pm at NW corner next to Amelia Earhart statue. You will enjoy the tour.

Okay to show up and pay at tour too.

You can leaver us a message on how many people will be attending at 818-347-9665 or info@TheMuseumSFV.org. 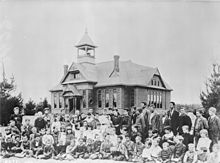 Posted by The Museum SFV at 9:41 AM No comments:
Email ThisBlogThis!Share to TwitterShare to FacebookShare to Pinterest

Please come on out to a theatrical reading of How High the Moon by award-winning playwright Barbara Nell Beery.

An inter-generational dramatic comedy exploring the sensibilities, values and dertails of the way of life was lived in the evolving San Fernando Valley during the boom years following WWII. 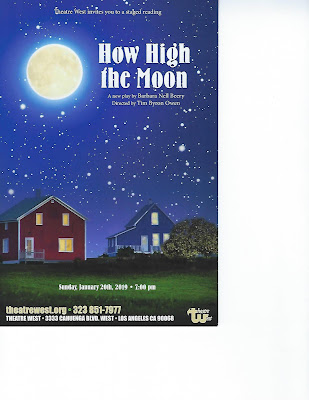 Posted by The Museum SFV at 11:20 AM 4 comments:
Email ThisBlogThis!Share to TwitterShare to FacebookShare to Pinterest

25 years ago - Where were you when the 1994 Earthquake struck? Tell us all about it

Have you ever heard someone say, "my, how time flies!"

Well, it has been 25 years ago to the day that the earth shook, quite hard in the San Fernando Valley and surrounding counties.

Most reports state on Monday, January 17, 1994 at 4:30:55, a 6.7 quake struck Reseda, CA. Northridge stole the spotlight as the official name, but the epicenter was later determined to be near Wilbur Avenue and Arminta Street, about a mile from the Cal State Northridge campus. 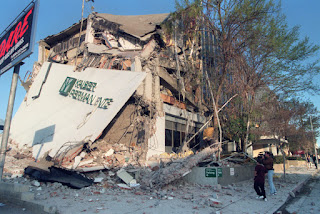 
My family has lived in Northridge since the mid 1960s. We experienced the 1971 Sylmar earthquake and witnessed those well-built, standard block walls come tumbling down, a portion of the standard brick chimney come tumbling down, cracks in the pool and concrete decking, loss of most of the contents of the plates and glasses and some frayed nerves.

In 1994, in another home in Northridge, my parent's home did not have that much major damage, but the house shook continuously for about 24 hours.  It certainly was a bit spooky without power, the neighborhood was pretty dark (I used the internet to confirm there was 29% visible of the moon that evening).

In 1994, I lived out of state, but I rented out my rent-controlled apartment in Santa Monica. My friend that was living there, my friends in the SFV, in Simi and other areas all said the same thing, "WOW, that was one scary earthquake!" 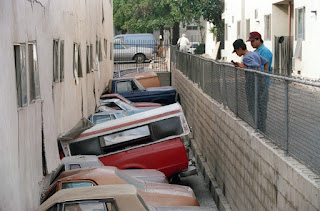 Two men inspect damage to cars and apartment complex after Northridge earthquake in Canoga Park. Federal inspectors reported that several hundred homes have been condemned and as many as 40,000 will need repairs. (Timothy A. Clary/AFP/Getty Images)


I visited later that week, on the Friday and was in the backyard when a 5.x level earthquake shook. I was sitting on the grass in the backyard, heard a dog bark first, then the lemon trees began to shake and then it hit.  It was pretty weird to ride one out in the backyard. It was a bit cool because there was not anything that could fall on me, so I just sat and experienced the quake.

Over the years, so many earthquakes had the rolling feeling as though you were on a boat. If you are one not to panic, the first golden rule of experiencing an earthquake in Los Angeles, you were fine with most of these natural phenomenons. 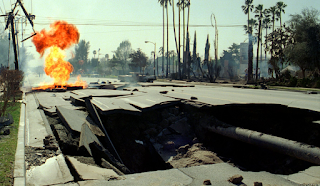 By almost all accounts, locals stated this one, at least in the very first moments along with large aftershocks was the real deal and shook nerves for days and even weeks.

Here is one account of earthquake statistics - we have found varying figures. The quake killed 57 people, injured more than 9,000, displaced 125,000 residents and damaged or destroyed more than 82,000 buildings in Los Angeles, Ventura, Orange and San Bernardino counties. 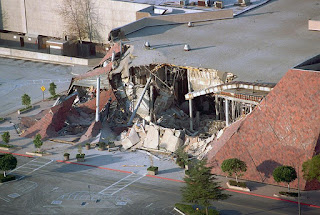 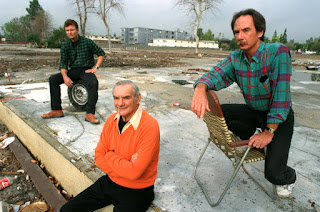 Alan Hemsath, left, Jerry Prezioso and Steve Langdon were the last survivors removed from Northridge Meadows. Langdon and Prezioso shared Apartment 106, which used to be on the slab on which they sit. (Ricardo DeAratanha / Los Angeles Times) More photos

A fresh batch of firefighters finally showed up, and Henry headed back to the station. The search continued into the night, but after Prezioso and his roommate, only one tenant was pulled out alive.

Hemsath, the man in Apartment 110, said a firefighter had found him and dug a hole above him. But getting him out was tricky and took a few hours. They had maneuvered a wood beam off his leg but couldn't lift the electrical box pinning down his left arm. They considered amputation, but eventually decided to wedge an air bag under the box and hoist it up just enough to wiggle him free.

"I was the last guy out of there," Hemsath, now 57, said as he traced his index finger along a scar the length of his left forearm. The general contractor spent a week in an intensive care unit and then several more in the hospital. After his release, he returned to Northridge Meadows and salvaged a mug he had gotten at an Elvis Costello concert. He keeps it on a shelf of his home, where his bedroom is on the second floor.

Things aren't like they once were, he said, where almost everything reminded him of the earthquake that had killed 16 of his neighbors. Now, 20 years later, there are still reminders. But you have to dig for them.
--- --

Any way you slice it, it was an amazing experience for those that can physically recall that moment and disaster. At the same time, it is also memorable for those who were not in the area, but spoke to  family members and friends who experienced the ordeal.

Did you experience the earthquake?

What was your initial thought?

What happened to the place you were living in?

What do you remember about your other family members, neighbors and friends who also experienced the Northridge earthquake on January 17, 1994?

Send us a comment and tell us about it.


Posted by The Museum SFV at 5:58 PM No comments:
Email ThisBlogThis!Share to TwitterShare to FacebookShare to Pinterest 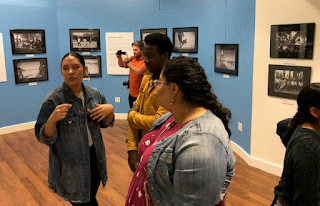 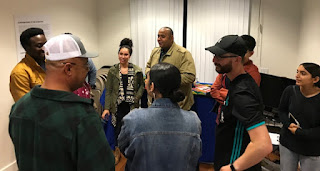 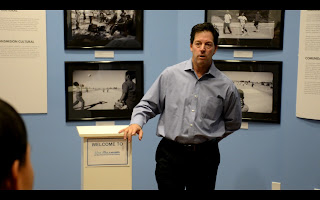 Leopoldo Pena primary photographer provided his insight and creativity into the background of many pieces in this exhibit. He did so in English and Spanish. 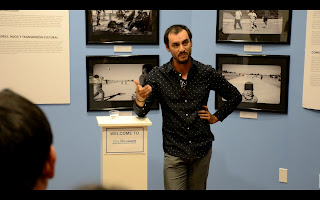 Paula Mota, a graduate student in the Department of Anthropology at CSUN, spoke, in English and Spanish about the chronology of the exhibit, talked a bit on the equipment. 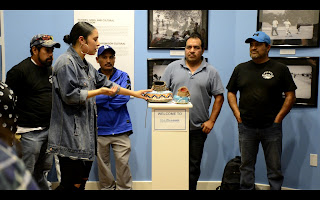 A few local players, who participate in games in the Hansen Dam area, fielded questions about equipment, playing locally, playing in tournaments and a bit of the history of the game, both in English and Spanish. 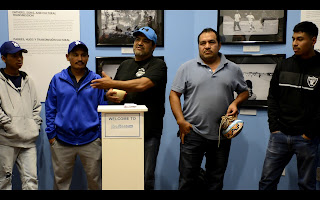 Much thanks to Dr. Suzanne Scheld, Chair of the Anthropology department, current Museum board member and several other students that assisted with the build out of the exhibit.

A big thank you to food sponsor Vallarta Markets for their generous donation of delicious food.

If you have not toured this exhibit, please do so as it is scheduled to be at The Museum through the month of January.

Overview of the Pelota Mixteca exhibit

The origins of pelota mixteca are unclear. Some believe references to the game are etched in the 3000 year old walls of Dainzú, a Mixtec archaeological site located in Oaxaca. Others argue the sport was derived from early forms of European tennis that were adopted by the Spanish and imported to Central America several hundreds of years ago. Yet another theory is the sport emerged in Mexico the 1900s.

Happy New Year from The Museum of the San Fernando Valley

We wish our members, donors, advisors, board of directors, valley residents and visitors a healthy and happy new year... and one filled with history, art and culture.

Please plan on visiting YOUR museum often during the year as we will have several new exhibits in 2019, new events and programs too! 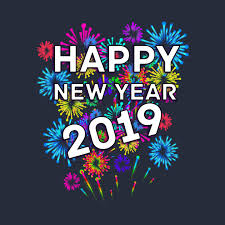 Posted by The Museum SFV at 11:11 AM No comments:
Email ThisBlogThis!Share to TwitterShare to FacebookShare to Pinterest
Newer Posts Older Posts Home
Subscribe to: Posts (Atom)