A MARINE'S CHRISTMAS LETTER FROM DECEMBER 1943 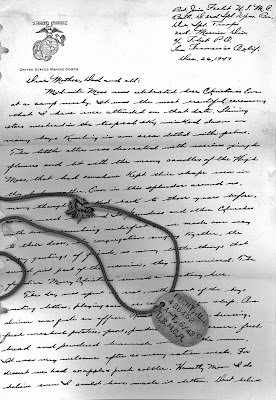 Dear Mother, Dad and all:

Midnight Mass was celebrated here Christmas Eve at a camp nearby. It was the most beautiful ceremony that I have ever attended on that date. Shining stars overhead in the tropical sky winked down on many boys kneeling in our area dotted with palms.
The little altar was decorated with various jungle flowers and lit with the many candles of the High Mass, that had somehow kept their shape even in this hot weather. Even in this splendor around us, many thoughts sneaked back to those years before as we used to attend St. Brendan's and other churches with snow crunching underfoot as we made our way to their doors, the congregations singing together, the cheery greetings of friends - so many things that seemed just part of the occasion. They were missed. The familiar Merry Christmas seemed a mockery here.
The day was spent in rest, with most of the boys writing letters, playing cards, and catching up on sleep. Our dinner was quite an affair. Roast turkey, gravy, dressing, fresh mashed potatoes, peas, powdered cranberry sauce, fresh bread and powdered lemonade were on the menu. It was very welcomed after so many ration meals. For desert, we had an apple and peach cobbler. Honestly Mom, I do believe even I could have made it better. don't believe what good seasoned food like you served tastes like any more.
In the evening we attended boxing bouts that determined the Champions of the Islands. All the allies in this part of the world took part with several winning awards. Medals were donated by movie stars and were quite pleased to see three Marines that fought, each walk off with one as a winner. The bouts were refereed by a former heavy weight champion of the world, and a former football player of great fame. The Army and Navy competed also, winning many matches.
Two packages arrived in the afternoon. One from Aunt Cashie (Ryan-Fecht), containing cigarettes, the other from Joye (the girl he met on leave in North Hollywood, California) was a pocket poker set, which no doubt will see much wear around here.
Suppose you can realize how surprised we were when the Battalion gave each man two bottles of American beer. Guess that's all we needed to complete the festivities. It certainly went over big and was certainly enjoyed.
Well, the end of the day found us much happier than we had been in many months. We still hope our next one will be spent at home, no matter how grand we may have it here.
I hope you had your happy holidays and may God keep you all well during this coming New Year. I thought of you often yesterday, and in closing I send my love to all.
Yoour son and brother Jimmie

thank you for sharing this.