CHERISHING OUR VALLEY     2012
The following was provided to The Museum of the San Fernando Valley by LaDonna Van Wolf in 2012.
SAVE OUR AMERICAN WILDLIFE COIN
This campaign was started by the Van Wolf family.   The high-relief Art Bronze Medal was designed and executed by the internationally well know sculptor, Henry Van Wolf. It was designed to focus the attention of the public on the need to save “Our American Wildlife”.   On one side is a replica of Henry Van Wolf’s “Fighting Stallions”.   On the other side is a replica of his “Great Horned Owl”. It was the first in a series of coins. 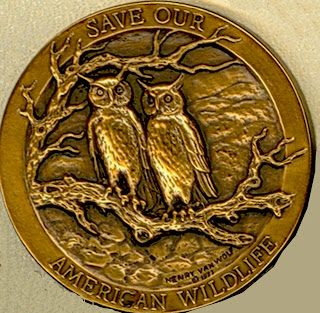 Bronze commemorative coin by artist Henry Van Wolf 1973 - Gift to The Museum of the San Fernando Valley from Joseph Van Wolf- January 2012.  (click on image to enlarge it) 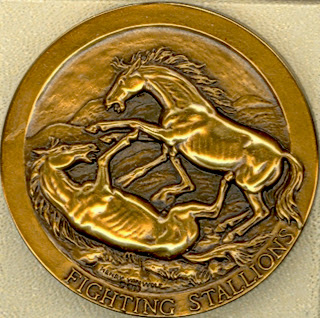 Posted by Gerald R. Fecht at 12:39 PM No comments:
Email ThisBlogThis!Share to TwitterShare to FacebookShare to Pinterest
Labels: 1973, Henry Van Wolf Save Our Wildlife coins

CHERISHING OUR VALLEY     2012
Joe Van Wolf, contributor of the Henry Van Wolf sculpture collection to The Museum of the San Fernando Valley, shares images from his father's archives with us. 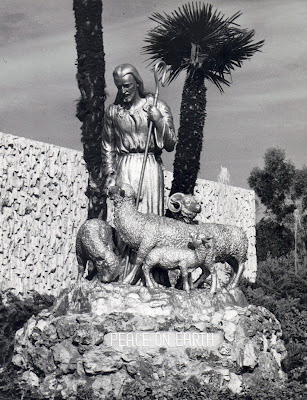 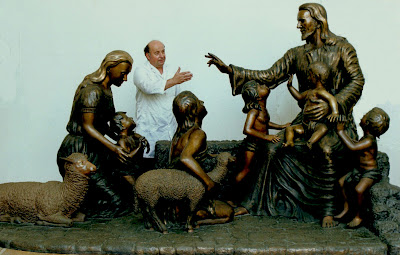 Joseph Van Wolf with his father's sculpture of Jesus with the little children. Work is in the Van Wolf family collection. (click on image to enlarge) 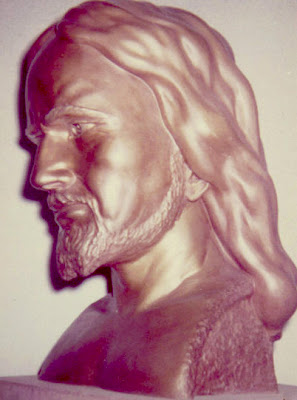 Bust of Christ by Henry Van Wolf for a Methodist Church. 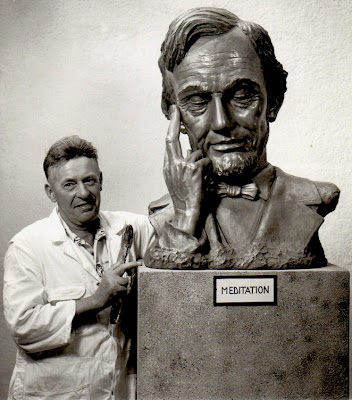 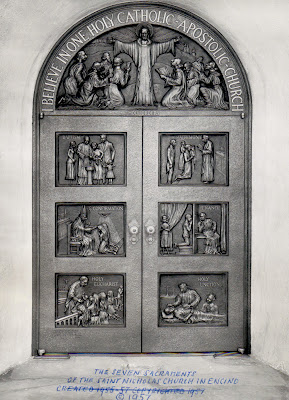 CHERISHING OUR VALLEY      2012
The following is an article that appeared in the Culver Alumnus magazine or newsletter on October 1932 on page 14.  Culver Military Academy is located in Indiana. Spelling as in the article.


Ranch for Fine Feathers
"Zoology, or that part of it which deals with the vertebrates that move on wings, has always been the favorite science of Burton C. ("Ski to you) Tremaine, 11ema&ss. The rara avis has a fascination that he cannot resist. When he was growing up Ski managed an aviary which was populated mostly by proud pouters and cocky fantails. He frequented the bird cages at the zoos and lost no opportunity to visit exhibitions of fowl, live or stuffed.
The strange creatures from distant lands, the bright fellows with frills in their tails and shakos on their crests, attracted him most and his determination to know more about them, from what wild domains they came and how, set him on a quest that has led to a unique and singularly satisfactory outcome.
He has become a bird man in a plural sense, for he is both an able aviator and a partner in one of the country's principal commercial aviaries, a bird ranch in Van Nuys, California, known as Bird Wonderland, Inc." 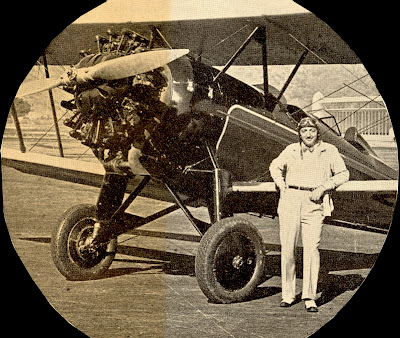 "Ski" Tremaine, '11, with his Pitcarin Mail Wing - (click on image to enlarge)
"Athirst for knowledge about birds, Tremaine once stopped in Washington D.C. and talked to government experts in charge of the importation of birds. From them he learned many things of interest. He learned that the bird business, that is, the importing and breeding of strange and valuable species, was a growing industry. What was particularly of value was the discovery that, although rare birds were being imported by the thousands, the supply never filled the demand.
On going to California several years ago he was impressed by the fact that no estate was complete without an aviary and that every back-yard in the less pretentious districts had a bird cage of some sort.
He found that many of the Hollywood celebrities owned aviaries in which thousands had been invested. John Barrymore had a collection of precious specimens valued at $25,000; Lupe Valez had assemled canaries of every known variety; DeWitt Jennings had a congregation of parrakeets that were famous; Polly Walker carried a half moon parrakeet on her shoulder; Edgar Rice Burroughs, the Tarzan author, had a colony of queer birds planted near his study window, and at Cataline Island, William Wrigley Jr., had the largest known bird collection.
From these observations sprung the idea of Tremaine's bird ranch. On a site on Ventura Boulevard between Santa Barbara and San Francisco, Bird Wonderland was established and incorporated. (Note: the error in geography here is in the original document).  C. B. Glick, an expert in ornithology became Tremaine's associate. Glick manages the ranch and looks after the importations. He has personally led the ranch's expeditions to capture specimens.
Several thousand pairs of breeding birds are housed on the ranch and the business has grown tremendously. Bird Wonderland has customers all over the United States and Canada and it supplies dealers and zoos as well as individual fanciers and per purchasers. A retail store has been built on the ranch and it carries on a thriving mail order business in bird cages, bird seen and one or two specials, such as miniature cacti gardens and water lillies.
"There is an ever increasing interest in birds and animals," says Tremaine.  "Witness the great crowds that have flocked to such feature pictures as Congorilla and Bring 'Em Back Alive. The book stores are full of books about adventure in connection with the capture and study of bird and animal life and the thoughts of the adventurous are turned to the Orient and the distant islands of the sea. Interest is not confined to wild life. The frontier has been gone a long time and we have lived in the machine age long enough to make animals almost a curiosity."
Last year the Bird Wonderland ranch sent its agents to Singapore, which is regarded as the bird market of the world, to establish a compound for assembling birds and shipping them to the ranch. This compound will be maintained permanently and standing arrangements has been made for certain sources in foreign lands.
"It is a delight to visit Bird Wonderland where you find birds from every corner of the globe" writes a Hollywood columnist. "There are Mandarin ducks, Formosan teal (siad to be the fasted birds with a speed of 110 miles an hour), egret, herron, golden pheasants, white Java sparrows, ring-neck parrakeets, Brazilian cardinal, finches of various kinds and other queer and beautiful creatures." 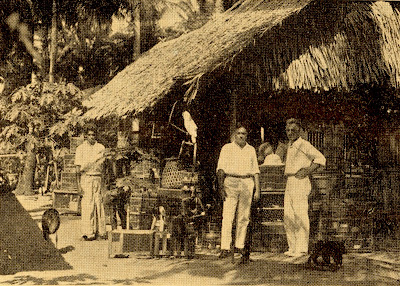 Bird depot established by Tremaine's ranch at Tanjong Katong, in Malaya, which abounds with the products the ranch imports and markets in the United States.  (click on image to enlarge)
In the ranch's flocks are eight varieties of parrakeets, five kinds of love birds, no end of canaries and finches, a paradise whydah (an ornamental bird with an arch tail often twice as long as the body0, Java rice birds, Japanese tumblers (called the upside down bird because they tumble continuously from their perches and think nothing of making a complete sumersault on the way down), diamond doves, South American bugle birds, India thrushes, Japan robins, taking hill mynahs (from the lower slopes of the Himalayas), parrots from Mexico and Central America, cockatoos and macaws.
Parrakeets are bred on an elaborate scale to keep up with the demand for them as pets. About 5,000 are kept in the aviary and as many as 500 are shipped monthly on standing order to one dealer in Chicago. The parrakeet is a species of parrot distinguished by their small size, their long tails and a striking difference in color between the male and female.  They are found principally in India, northern Africa, Malaysia and Australia. A species of African parrakeets makes a display of affection and is commonly called the "love bird."

Finding some time ago that there is a steady demand from hospitals an laboratories for small monkeys needed in medical and other scientific experiments, the ranch introduced a line of Java monkeys for this trade. It also imports huge snakes from the jungles adjacent to the Malayan peninsula for sale to carnivals, side shows and similar menageries.
$ 25,000 Pet Cargo
Last October Glick brought in specimens valued at $ 25,000 in one shipment. In the lot were lemurs from Borneo; a white langur from Siam; an adjutant stork from New Guinea, whistling gibbons from Borneo, a tree kangaroo from Australia, a Malayan bear cat, an assortment of pythons, a pair of Victoria crested pigeons, a collection of pea fowls from Java, and a weeping sapajou, a monkey that 'laughs and smiles', but is called a weeper because of the mournful cries it makes when it is sad or lonesome.
Tremaine is in the insurance business in Cleveland (Ohio) and divides his time between that city and California where his chief interests are the bird ranch and aviation. He pilots his own plane, a Pitcarin Mail Wing. It is a two-seater with a Wright 225 horsepower motor.
His nickname has no relation to hjis enthusiasm for flying. He acquired it while he was at Culver; why local history does not reveal. He was in Company A, then commanded by Don Pierce, Eward W. Mason was the first lieutenant and Thomas A. Gabel was the second lieutenant. 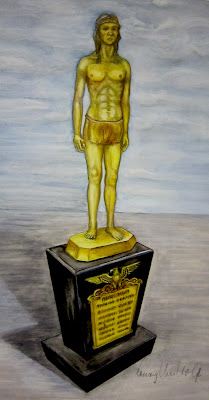 Concept image of the Fernando Award by Henry Van Wolf - Gift to The Museum of the San Fernando Valley from Joseph Van Wolf (the artist's son) 2012.  (click on image to enlarge it.)

The most important community service award in the San Fernando Valley is the coveted "Fernando Award".  The sculpture was done by the Van Nuys artist Henry Van Wolf. This month, The Museum received the original concept watercolor by Van Wolf.
Posted by Gerald R. Fecht at 11:51 AM No comments:
Email ThisBlogThis!Share to TwitterShare to FacebookShare to Pinterest
Labels: Fernando Award, Henry Van Wolf, Joseph Van Wolf 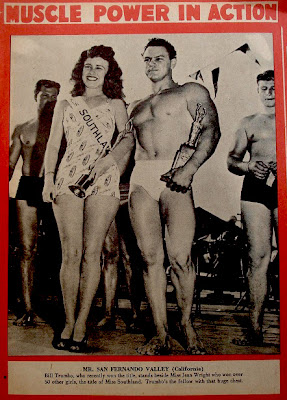 Muscle Power magazine dated November 1947 (click on image to enlarge it)
Art Jacobs wrote The Museum that Muscle Power Magazine had this photo of Bill Trumbo who was Mr. San Fernando Valley of 1947. Bill Trumbo of Burbank was a physical culturist who has been runner up in  the "Mr. America" contest and who is rated as one of the most nearly physically perfect men in Southern California. Standing next to him is Miss Jean Wright who won the title of Miss Southland.
Posted by Gerald R. Fecht at 11:35 AM No comments:
Email ThisBlogThis!Share to TwitterShare to FacebookShare to Pinterest
Labels: 1947, Bill Trumbo, Jean Wright, Mr. San Fernando Valley

CHERISHING OUR VALLEY   2012
These are few informal photos taken of The Museum's exhibit space in the Westfield Fashion Square Mall. (We're two spaces away from See's Candy.) They were taken by Phyllis Hansen, member of The Museum's Board of Directors. 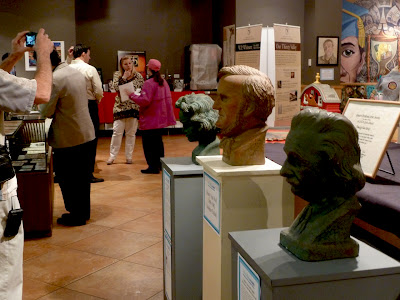 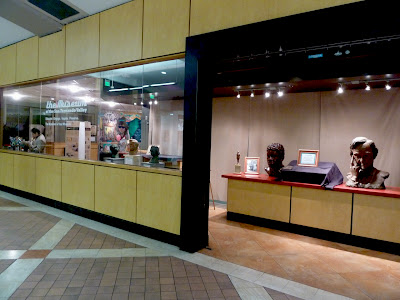 CHERISHING OUR VALLEY   2012
Museum supporters, Gary Fredburg and Fred Berk have been systematically building The Museum's collection of historic and vintage postcards for the last three years. When you visit The Museum's exposition space at Westfield Fashion Square in Sherman Oaks, you'll see many good examples of their effort.
Here are some great vintage postcards of the Mission San Fernando Rey de España in the Valley's Mission Hills, in The Museum's collection.  (Click on the images to enlarge them.) 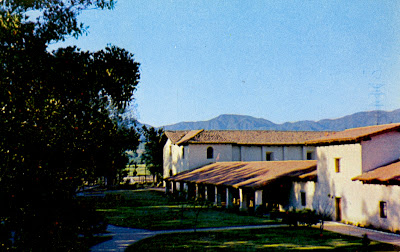 The church and mission workrooms of the Mission San Fernando. 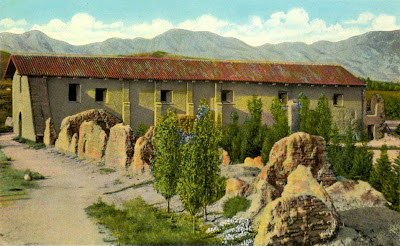 The church and workshops of the Mission, prior to the restoration of the shops. 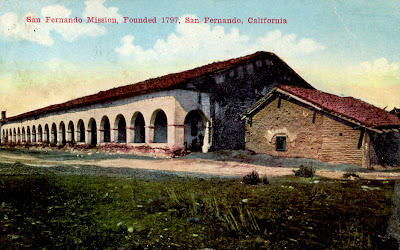 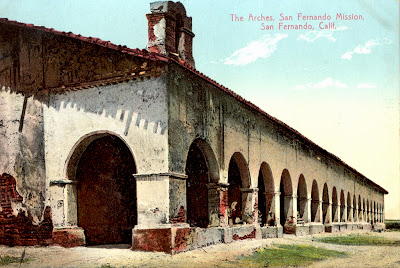 Partially restored arches in the front of the Mission San Fernando Rey de España.
Support the efforts of The Museum Community to bring about a great Museum of history and culture for the greater San Fernando Valley. Remember your donations are tax deductible.

Please join us at our new exhibit space at Fashion Square Mall, Sherman Oaks at Hazeltine.  We will show you just a small part of what we are up to.
Visit DailyNews.com  and search "The Museum of the San Fernando Valley" for  Tuesday, March 6th's article about us and look for the Los Angeles Times' article next week.
Posted by Gerald R. Fecht at 5:20 PM No comments:
Email ThisBlogThis!Share to TwitterShare to FacebookShare to Pinterest
Newer Posts Older Posts Home
Subscribe to: Posts (Atom)