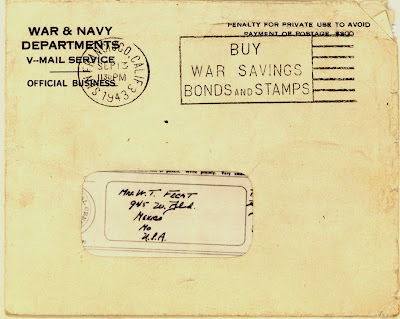 Archieves of The Museum of the San Fernando Valley - 2007
"V-Mail" letter from James Fecht to his mother from Guadalcanal, The Solomon Islands
Note:
"V-Mail" letters (Victory Mail) were developed during the Second World War. Letters from soldiers were done on special sheets of paper and microfilmed. The process saved tons of space for vital military use. Over a hundred thousand letters could be sent home in one mail bag. In the United States, the microfilm was processed and small photo letters were sent to the addressee.

4 September 1943 Sent by V Mail
Dear Mom: I know you wonder why I don't write more ofter but there is nothing I want to say about this to you, as it would no doubt worry you so much. I was in the hospital for a while, but nothing serious. We are subjected to Japanese air raids and have grand stand seats for night fighting those searchlights right from our own foxholes.
That's all I can tell you from this side of the world, but if I know you right, you'll be following us on the maps.
The news doesn't sound at all bad that we get from the States and feel sure that if they would turn us loose, within two months, we'd be having hot dog fires in the streets of Tokyo.
I'm always happy to receive any letters from home so want everyone of yo to write. I've has a little time lately for letter writing and seem to be doing some fancy catching up. I wrote Aunt Annie (Ann Fecht Shire) and Aunt Cashie (Cashie Ryan Fecht). Tell Sr. Veronica (Catholic nun) to write and tell all hello, and I hope to see you soon.
Your Son, Jimmie
Posted by Gerald R. Fecht at 12:16 PM