DISCOVERING OUR VALLEY   2011
Written by Museum Board Member Richard Hilton, "A Historic Walking Tour of North Hollywood 'Home of the Peach'" has just been produced by The Museum of the San Fernando Valley. What began as a small souvenir for those who participate in the bi-monthly walking tour of the NoHo, has evolved into a handsome 20-page booklet with many delightful photographs and stories of the Valley city once known as "the Home of the Peach." 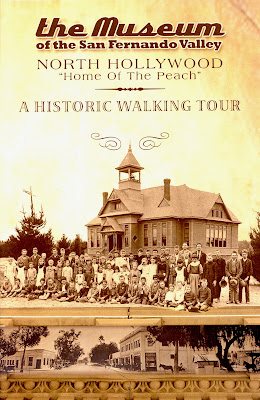 (click on image to enlarge)
With photographs generously loaned by Guy Weddington McCreary and images from the Archives of The Museum of the San Fernando Valley and from the collection of the author Richard Hilton, the booklet features images that haven't been seen for nearly a century.

Edited in part by Museum Board Member Phyllis Hansen, the work was also edited and produced by Michel Stevens. Graphic design, creative and layout services were provided by Graphic Elements. The brochure was funded by the Mid-town North Hollywood Neighborhood Council and in part by The Museum of the San Fernando Valley.

For the last two years, The Museum's historic walking tours have been graciously sponsored by the Universal City North Hollywood Chamber of Commerce.

DISCOVERING OUR VALLEY    2011
Richard Denning was one of the big "hunk" stars of the 1940s. Here he poses with the Paramount starlette Helen Gilbert in the Dorothy Lamour film, "Malaya"  Jackie the Lion (famous as the Metro Goldwyn Mayer logo star) lived and was trained for the movies in Bird Wonderland in what is now Encino, California. 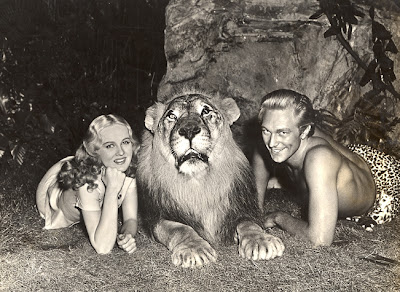 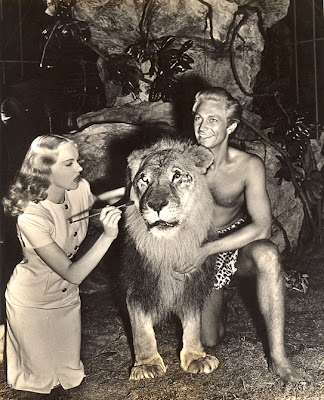 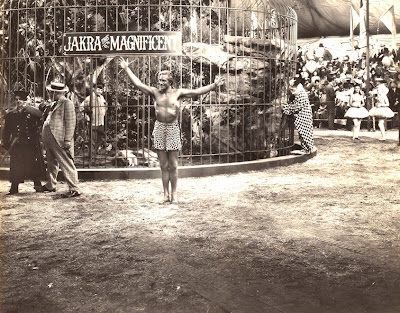 Richard Denning - Photo gift to The Museum of the San Fernando Valley from Joan Putney Nov. 2011.  (Click on images to enlarge)  Image 4276 - P15  All of the birds and animals used in this Paramount film were provided by Bird Wonderland in Encino, California.  (click on image to enlarge) Image 4275-P 14 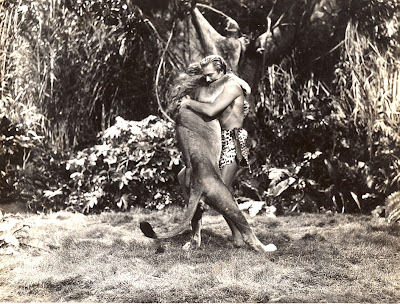 MERRY CHRISTMAS FROM YOUR MUSEUM DEC 2011 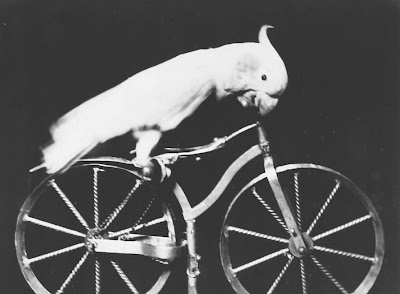 "Cockie" the Cockatoo Actor - c 1930s - Photograph Number 4272 - Gift to The Museum of the San Fernando Valley by Joan Putney Nov. 2011.  (click on image to enlarge)
This white bird was at one time one of the most successful working actors in Hollywood. Cockie, owned by Bird Wonderland in Encino, lived to be over 75 years old and starred in nearly all of the animal-related films of his era.
Posted by Gerald R. Fecht at 2:16 PM No comments:
Email ThisBlogThis!Share to TwitterShare to FacebookShare to Pinterest
Labels: Bird Wonderland, cockie the cockatoo, Encio

DISCOVERING OUR VALLEY  2011
Bob Peppermuller is at it again, working to save San Fernando Valley "Redcar" history. Here he shares a sign indicating the location of the McKinley Home for Boys in Van Nuys (later Sherman Oaks. The McKinley Home opened at its location on Riverside Drive in 1923. It served abused and neglected children there until 1960, when it moved to its present location in San Dimas.
(Click on the image to enlarge the sign.) 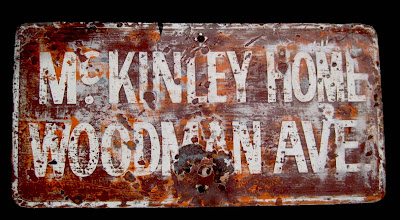 Mr. Glenn E. Mueller of Diamond Bar shares this insight into the famous Bob and Dolores Hope home in Toluca Lake.
“My folks & I lived at 4348 Ledge Ave. in what's now Toluca Lake, during 1941 to 1951, it was North Hollywood . . .
My dad had an aerial photo taken in 1944 which includes Bob Hope's house on the left. The street running up the top of the picture is Woodbridge and Bloomfield runs "into our driveway."
(Click on photograph to enlarge it.)
I graduated both North Hollywood Jr. High and the North Hollywood High School  S-54 class . . My sister, Marilyn, was a graduate of both but S-56 from North Hollywood High School 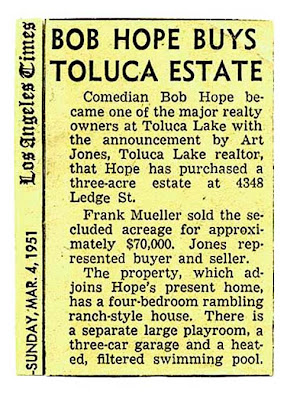 The 2nd attachment is when "we" sold the house. Bob Hope bought it to live in while his mansion was renovated. Then he subdivided the three acres we had and sold off the lots. Hope brought his residence property line up to the driveway and behind the four car garage (not 3 as mentioned in the LA Times) which increased his golfing area.
That $70,000 sale price is now going for $2,500,000.00 and that's just for the driveway up behind the house and down the south side of the house to Ledge.  The pool was built in 1946 . . . . “
Posted by Gerald R. Fecht at 4:55 PM 4 comments:
Email ThisBlogThis!Share to TwitterShare to FacebookShare to Pinterest
Labels: 1951, Art Jones Realty, Bob Hope, Dolores Hope, Frank Mueller, TOLUCA LAKE

VAN WOLF SCULPTURE OF LINCOLN IN MEDITATION IN BURBANK LIBRARY

DISCOVERING OUR VALLEY    2011
In 1962, San Fernando Valley sculptor Henry Van Wolf completed the long admired bust of President Abraham Lincoln in Meditation. I haven't had the opportunity to read its dedication plaque but have the strong suspicion that it was a donation of the long established Pomeroy family in that community (A Pomeroy married into the Burbank family about the same time the town was founded). 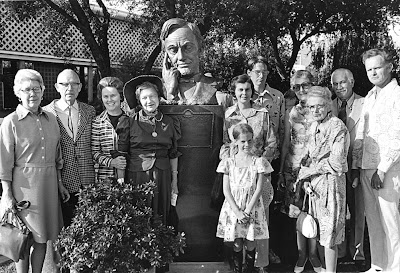 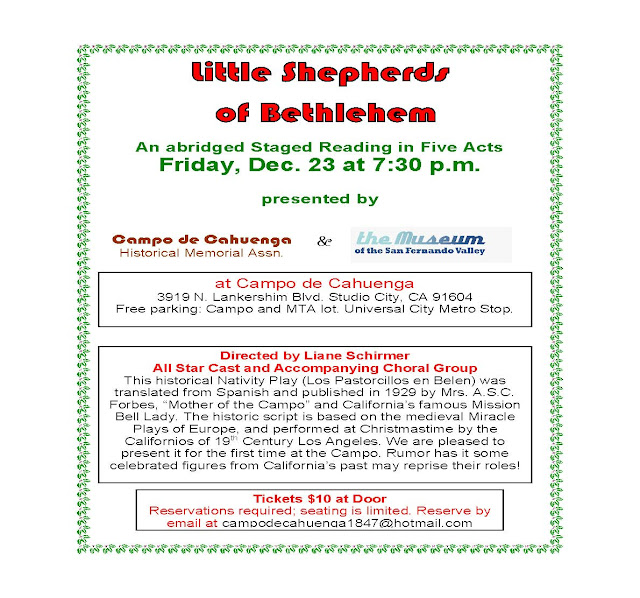 So many important actors have lived and worked in the San Fernando Valley, that publicity photographs of one will often include other famous residents. These photographs given to The Museum by Gary Fredburg in November of 2011, were part of an effort to build our files on the Van Nuys actor Andy Divine, but his celebrity neighbors quickly add to the history of the entertainment industry in the Valley. 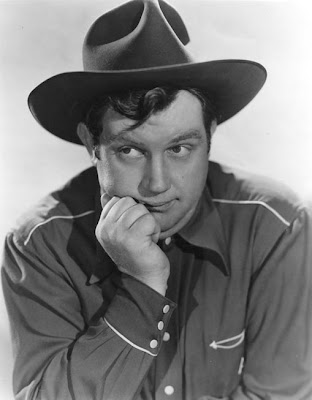 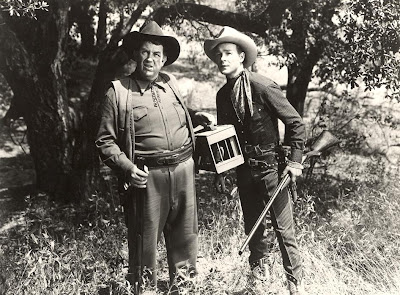 Andy Divine and Roy Rogers in :The Far Frontier" - Republic Picture.  Roy Rogers and Dale Evans lived on a ranch between Chatsworth and Canoga Park. The film was made in the San Fernando Valley in 1948. 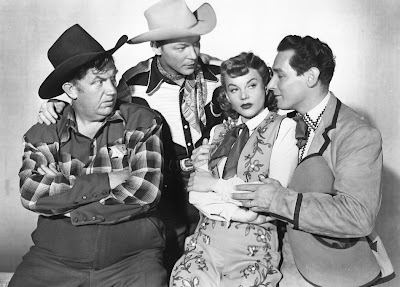 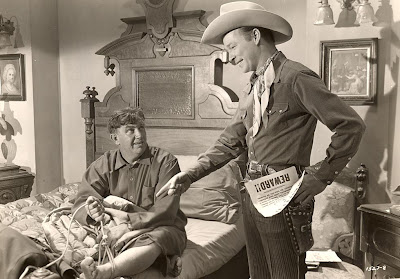 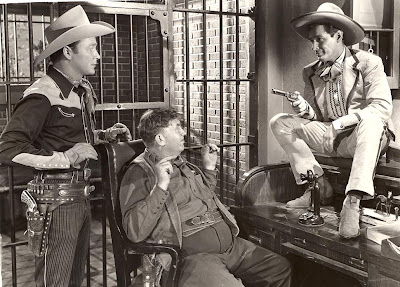