MAP OF INVASION OF IWO JIMA IN WORLD WAR II 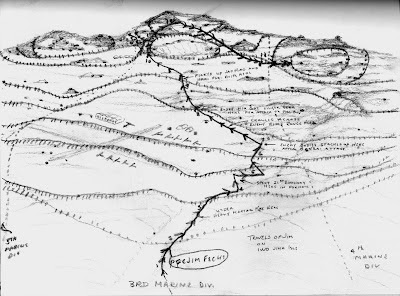 As your Museum processes incoming materials to our archieves, we will be sharing them on thise blog. Many of our recent aquisitions are of a military nature. This is a map of the exploits of a member of the 3rd Marine Division during the invasion of Iwo Jima. The use of the word "Jap" for Japanese are the Marine's own term and commonly used during the heat of the war.


Pencil map of Iwo Jima, done by PFC James L. Fecht showing his positions during the invasion of the island. "Travels of Jim on Iwo Jima Isle"

Follow the line going up the mountain >>>>>>>> Barriers are indicated as fence-like horizontal lines.
1. Where the battle begins for Jim
2. First barrier
3. "Under heavy fire here." Second barrier.
4. "Spent 21st birthday here in foxhole."
5. Third barrier - to the left is an airfield
6. Fourth barrier
7. "Enemy bodies stacked up here after bonsai attack.
"Crawled across enemy rifle range here."
8. Fourth barrier "Buddy mine got Silver Star here for attack on pill box.
Americans were pinned down here, until an American Indian Marine
attacked the machine gun emplacement from its extreme left, under cover fire from Jim and his buddies. He had risked his life to stop
the firing on his unit. He killed the Japanese defenders with hand
grenades.
9. Fifth barrier "Picked up Jap flag and hari kari knife here."
10. The 3rd Marines and 4th Marines join together to secure the mountain
top, then move right down and across a sixth barrier.
Posted by Gerald R. Fecht at 11:16 AM