As the San Fernando Valley and all of Southern California developed an automobile culture, Dick Whittinghill (Radio KMPC) became a disc jockey celebrity. His wit, clever programming and involvement with the community made him one of the most popular figures of his era. His spoof of radio soap operas, the Romance of Helen Trump was a common conversation in offices across the city. 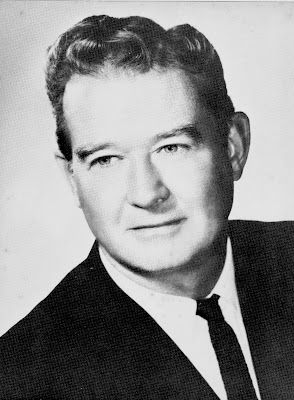 Dick Whittinghill - Radio Personality
Vintage postcard - Given to The Museum of the San Fernando Valley
by Gary Fredburg - December 2010.
Posted by Gerald R. Fecht at 8:50 AM
Email ThisBlogThis!Share to TwitterShare to FacebookShare to Pinterest
Labels: Dick Whittinghill

His house stood until a few years ago near mine in Studio City, a block off Tujunga Ave. It was a Dutch Colonial with a rose garden next door. A developer bought it, tore it down, and built two awful looking mcmansions that have stamp sized yards on the property. It took forever to sell them, and after a year-year and a half, one is for sell again.