2010  THE YEAR OF VALLEY ADVENTURES
The handsome statue of Amelia Earhart that stands in North Hollywood Park rightfully points to what is now known as Bob Hope Airport. Almost inevitably when Richard Hilton or Bronwyn Ralph invite their historic walking tour visitors to the statue an aircraft will lift over the Valley and Amelia's tribute. But, the aircraft will also be crossing over the Portal of the Folded Wings, the splendid monument in Valhalla Park to the fallen aviators who set humankind into flight. 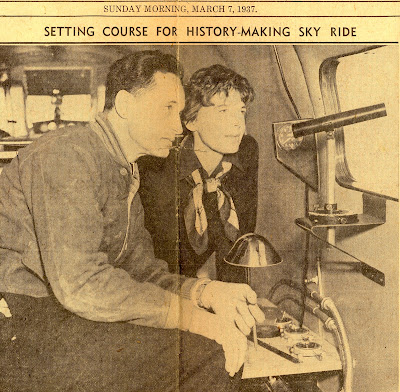 James Bassett Jr. the writer of this news clipping from the Sunday edition of the Los Angeles Times on March 7, 1937  could not have dreamed that the people he was describing would soon be forever part of San Fernando Valley, and indeed world, history.

How different the fur draped woman in the May Company advertisment from this same March 1937 newspaper depicted the ideal woman of the era.  Amerlia Earhart's life and determination would become a role model for thousands of young women who would come after her. 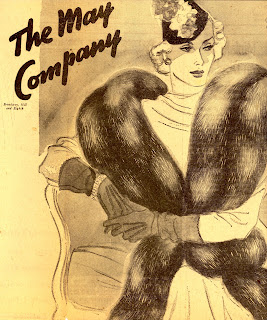