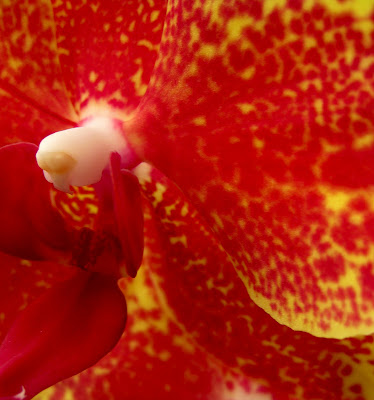 An orchid for September

The number of times that one is supposed to say "Rabbit" on the first day of the month, is debated. However, according to my wife and her pals from Pomona College, you only get the "Month of Good Luck" by uttering the old rrr before saying ANYTHING else!
I think my wife Janne cheats a little by putting a Rabbit post-it note on her alarm clock.
If you wake up, say around 2:30 am, should you shout out Rabbit, Rabbit, Rabbit - or wait anxiously for dawn.
No one seems to know where or when the Rabbit custom arrived in the States, but it seems to have originated in New Zealand. I rather favor Australia as its origins, since as a little boy I read Peter Rabbit - and, fully understand shouting Rabbit to alarm the house for the protection of cabbages, carrots etc.
We have opossums, squirrels, fruit rats and an occasional coyote on Vanalden Avenue in Tarzana, but no rabbits.
Our friend Mary has rabbits in her neighborhood.
Anyway, have a great September. And, don't forget a great Museum of history and culture can't rely on luck to come into being.

Email ThisBlogThis!Share to TwitterShare to FacebookShare to Pinterest
Labels: Rabbit