A GREAT AUCTION IN THE SAN FERNANDO VALLEY 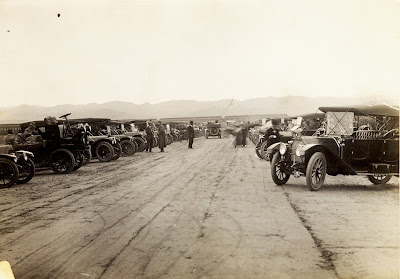 Likely the auction of livestock from the Van Nuys and Lankershim Ranches in 1911 - Photo gift from David High - July 2009 Refer to photograph HC-27
Richard Hilton, Director of Tour Operations for The Museum of the San Fernando Valley comments:
" I am suspecting it is February 22, 1911, auction day in Van Nuys. It would be looking South from what is today Van Nuys Blvd. with the Santa Monica Mountains in the background. The train would be the Southern Pacific on the tracks just north of Oxnard Street. I have never seen this photo before. It's great! What a great find these shots are."
Note: Mr. Hilton is planning a special walking tour of downtown Van Nuys this fall.

More from Richard Hilton
Okay, now I am thinking that this was the Lankershim/Van Nuys auction of ALL their farm equipment, livestock, etc. of the several different ranches held by the Los Angeles Suburban Homes Co. It was held November 4, 1910 and was a huge event; over 2,000 people there. The Times reports 7 special RR cars packed to the gills and a 100 cars there. It was held at the Kester Ranch just South of the Southern Pacific tracks at Oxnard and Van Nuys Blvd. Another was auction was going to be held later at the Patton Ranch which is just Northwest of Rancho Los Encinos. So... I think now that this is that auction, especially if it said "auction" on the photo. I think this is looking north as the RR tracks are in the background and the cars would be parked south of the tracks because that is where the Kester Ranch was.
Richard


We are checking with Bill Carpenter of the historical museum at LA Valley college to see if this photograph, from the High Collection, matches similar images in the college's collection.

Your Museum is a proud member of the LA Heritage Alliance. 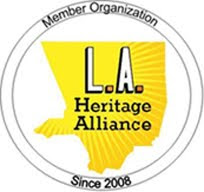