Phyllis Hansen says:
"Photographed Saturday afternoon. Those are not clouds over the Hollywood Hills. It's smoke. La Canada/Flintridge fire originated to the far right--as it got dark we saw the flames on the ridges. Not Hollywood sign, Griffith Observatory below. I live at the bottom of that cluster of homes in the Hollywood Hills on the left." 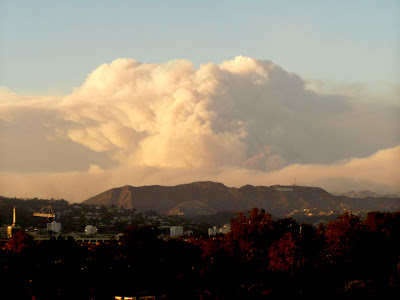 Photograph of Mount Hollywood by Phyllis Hansen - August 2009 - Archives of The Museum of the San Fernando Valley.


When Juan Cabrillo first entered Santa Monica Bay in 1542 , he and his crew observed great clouds of smoke over our part of Southern California. He referred to it as the "Baya de los Fumos" or "Bay of Smokes". It is said that Native Americans actually set fires periodically to control the overgrowth of vegetation.
The chaparral that covers the mountains surrounding the San Fernando Valley and indeed all of Southern California, when dry and overheated almost explodes when set afire.
Posted by Gerald R. Fecht at 8:34 AM