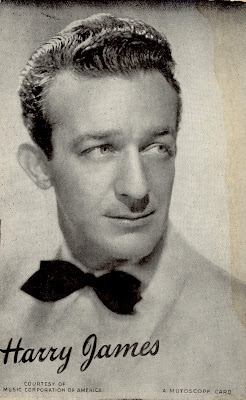 Harry James - historic postcard
Gift to The Museum of the San Fernando Valley from Gary Fredburg 2012
(click on image to enlarge)
The great Harry James was one of the most important performers of the Big Band Era in the late 1930s and 1940s. His trumpet was recognized world-wide. James' band began in Philadelphia and was the first to employ the amazing Frank Sinatra.
Harry James lived in Woodland Hills, with his wife the equally famous Betty Grable. Race horses bred on their ranch were American champions.  James often collaborated with Frank Sinatra who lived in Toluca Lake at the time.
Posted by Gerald R. Fecht at 11:00 AM