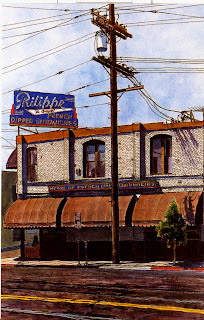 Because of its religious affiliation, my Notre Dame High School speech and debate team had no public ally supported transportation to our competitions. My pals understood the importance in America of the strict separation of religion and the government, and actually valued the adventure and ingenuity that it took to get around the city. Most of us held after school jobs to pay for our participation in Brother John Duran's speech club.

By graduation, the speech club kids knew Los Angeles well, and naturally had found a dozen great places to eat. One of our favorite hang outs was just a block from Olvera Street, a French dipped sandwich joint with saw dust on the floor. Phillipe's was already 52 years old when for the first time I gasped for air after eating the restaurant's innocent-looking mustard. Early on, we learned that there are places intrinsic to being a true citizen of L.A., and Phillipe's is in the top 10.

Phillipe's opened its door 100 years ago today. Like all things truly L.A., the place had to move a couple of times before it settled down. Now, the birthplace of the original French dipped sandwich is located at 1001 North Alameda Street, a small block from Union Station. The original location is somewhere under a freeway overpass.

Phillipe's has long served a kaleidoscope of customers. The time of day has a lot to do with who's waiting in line for a turkey sandwich or homemade chili. Cops and nurses arrive bleary-eyed from their late night shifts, starving USC kids troop in after the "big game", and dressed up folks show up after performances at the Music Center. My friend Karen isn't allowed to come home to Agoura from a meeting downtown without Phillipe's beef sandwiches and HOT mustard for Big Al.

More than one visitor to Phillipe's has commented "If only these walls could talk." In actuality, they do! Take time to walk around the tables loaded with customers to see the timeworn photographs of circus trains, of old time film stars and treasures from our city's baseball history. Stand by the doorway and think of the homesick soldiers that bought coffee from here for a nickel and noted how the coleslaw was every bit as good as their mom's in Missouri. The only thing missing today is the distant steam whistles from departing Southern Pacific trains.

If its too crowded for you on the main floor, you can climb wooden stairs to rooms pressed into service for the truly hungry. In the 1950s there were old timers who told us school boys about those upper floors, and how the place had once been a "flop house" (a place of ill repute) hotel above a machine shop.

In 1927, the Binder brothers bought the restaurant from Phillipe himself and carefully preserved the quality and great taste of the food since. Ask the woman who serves you at the counter, how long she's been with the company and you will be amazed.

Happy birthday Phillipe's, you make our city a great place in which to live!
Posted by Gerald R. Fecht at 12:26 PM

Email ThisBlogThis!Share to TwitterShare to FacebookShare to Pinterest
Labels: 1908, 1927, Phillipe's

My name is Sara Johnson, I live in california U.S.A and i am a happy woman today? I told my self that any Loan lender that could change my Life and that of my family after been scammed severally by these online loan lenders, i will refer any person that is looking for loan to Them. he gave happiness to me and my family, although at first i found it hard to trust him because of my experiences with past loan lenders, i was in need of a loan of $300,000.00 to start my life all over as a single parents with 2 kids, I met this honest and GOD fearing loan lender online Dr. Dave Logan that helped me with a loan of $300,000.00 U.S. Dollars, he is indeed a GOD fearing man, working with a reputable loan company. If you are in need of loan and you are 100% sure to pay back the loan please contact him on (daveloganloanfirm@gmail.com and Call/Text: +1(501)800-0690 ) .. and inform them Sara Johnson directed you.. Thanks. Blessed Be.