CHERISHING OUR VALLEY     2012
Mr. David Lashmet, who lives now in Orange County, California, has asked The Museum Community to help him put together some missing pieces of his family's history. Guiseppi Filippini and his wife were from Italy. Joe ran the gas station and his wife procured the "Imported Italian Foods." 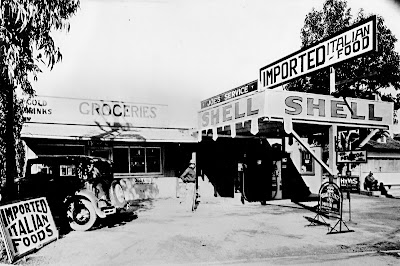 Joe's Shell Station and Italian Food 1935 - 1938   Studio City?  - Ventura Boulevard
(click on image to enlarge it.)
"I'm attaching a photo of my grandfather's SHELL station he ran from around 1935-1938.  It was located on Ventura Blvd. between Tujunga and Vineland.  My grandmother had a small restaurant next to it during the same time."  The actor Frederick March used to frequent her establishment.  "Some research, though, shows that March spent most of his home life back east.  He must have visited her place during the "filming" season (ha ha ha)."
"My mother attended the following schools in North Hollywood: Rio Vista Elementary, Lankershim Elementary, North Hollywood. Junior High (since renamed to Walter Reed Middle School, and North Hollywood High School.  She graduated from high school in Jan '48. Any photos or videos you might have of these schools during the late 30s - 40s would be appreciated. Plus, any other photos of Ventura Blvd. in the same general locale as their SHELL station would be appreciated. Any videos of the El Portal theater from the early 40s would be great, too."
"I also found the video on-line of you and the "museum" doing a tour of various local sites. Your role was explaining Alan Ladd's hamburger stand, etc.  I found this interesting, especially since he was one of my mom's favorite actors during that time."*
"Well, thanks for keeping the SFV history available to everyone. Again, thanks for all you and the staff do.  Sincerely,   David Lashmet"
Posted by Gerald R. Fecht at 4:48 PM