DISCOVERING OUR VALLEY     2011
Dorothy Lamour, who lived in Toluca Lake, was one of America's most famous film stars of the 1940s. The great "Road" films of the era, with stars like Bob Hope and Dorothy Lamour, were wildly popular. Here the beautiful Lamour poses with the wild animal star Satan the Tiger, promoting the film "The Road to Zanzibar" in 1941. 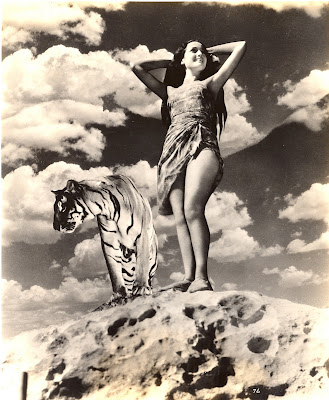 Dorothy Lamour and Satan the Tiger in "The Road to Zanzibar"  1941  - Photo gift to The Museum of the San Fernando Valley from Jean Putney 2011. Satan the Tiger lived at Bird Wonderland in Van Nuys. Refer to photo 4035 - click on image to enlarge.
Dorothy Lamour helped fund the construction of Saint Charles Catholic church in North Hollywood. Her funeral was held in the landmark church.
Publicity statement with this photograph:  "Wild Animals I Have Known - proof in pictures by Dorothy Lamour 7.  Satan isn't the first tiger I've ever known, either.  There was King, the huge Bengal tiger which stalked through my first picture, "The Jungle Princess".  Supposedly, I was raised by the tiger from childhood in the story.  So I had to romp with him.  My teeth chattered at the prospects but I soon learned that King was your friend for life if you scratched his ears. He love that and would purr like a kitten ... only the purring was so loud it reminded you of an airplane motor.".
Posted by Gerald R. Fecht at 4:45 PM
Email ThisBlogThis!Share to TwitterShare to FacebookShare to Pinterest
Labels: 1941, Dorothy Lamour, Paramount Pictures, Satan the Tiger, The Road to Zanzibar