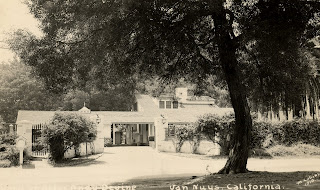 Home of actor Andy Divine in Van Nuys,- historic postcard gift from Gary Fredburg 1008 - Archives of The Museum of the San Fernando Valley (click on image to enlarge)

To the hundreds of kids who found relief from the summer heat of the San Fernando Valley in an era with few swimming pools, the Crystal Plunge in Van Nuys was a favorite hangout. It was build by the film and television actor Andy Divine who lived across the street on Kester Avenue.
Andy, who starred in the hit television production of the Adventures of Wild Bill Hickok as Guy Madison's sidekick "Jingles', built the Crystal Plunge so that classmates of his sons on the Van Nuys High School Swim Team would have a place to practice. For elementary school students, Halloween meant the chance to take as many pennies as they could pick up in one hand. If the child was very little, Andy would take one of his enormous hands and help the little one out.
Once a professional football player, Andy Divine got his first big career boost in the 1931 football film The Spirit of Notre Dame. In the next four decades, his raspy voice was one of the most recognizable in America. Andy was a strong supporter of the San Fernando Valley, and was made the honorary mayor of Van Nuys in the early 1970s. He died in 1977. 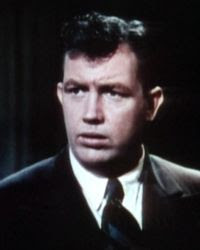 The San Fernando Valley, in the heart of the Creative Capitol of the world, deserves a great Museum of history and culture.
Posted by Gerald R. Fecht at 5:16 PM
Email ThisBlogThis!Share to TwitterShare to FacebookShare to Pinterest
Labels: 1977, Andy Divine, Crystal Plunge, Van Nuys, Van Nuys High School