Rosa Porto, the baker and Cuban émigré who founded the popular Porto’s Bakery & Cafe dies at 89

Rosa Porto, the baker and Cuban émigré who founded the popular Porto’s Bakery & Cafe chain in Southern California with her family, died on December 13th, 2019.
She was 89.

She came from humble beginnings to create a must stop for anyone near their locations.

When you see a line out the door each morning, you know something terrific is happening inside.  Once walking inside the door, the anticipation to satisfy a craving in your tummy was overwhelming.

It's family businesses like this that The Museum SFV appreciates so much. 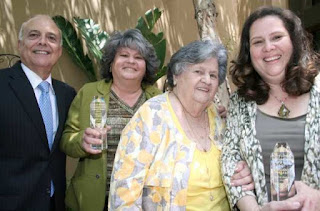 Then-Glendale Mayor Frank Quintero poses with Rosa Porto, second from right, and her daughters Beatriz and Margarita during an awards luncheon in 2012.

“I learned by breaking eggs and from necessity,”  was quoted in The Los Angeles Times as saying. “I started baking the cakes for my kids, and since they were pretty, my neighbors started asking me to make cakes for them,” said Rosa Porto.

Porto came from Manzanillo, Cuba. After Fidel Castro took power on the island in 1959, Porto lost her job as a manager at a cigar distributor, and her husband, Raul, was sent to a labor camp. Porto, who had grown up learning the recipes of her Spanish-born mother, supported her family by making and selling brandy-soaked sponge cakes, though Castro’s government forbade private citizens from owning businesses.

To learn more, read the article in the Los Angeles Times HERE.

Posted by The Museum SFV at 10:03 AM
Email ThisBlogThis!Share to TwitterShare to FacebookShare to Pinterest