John Glenn passed away yesterday at the age of 95. What a life!

Were you old enough to witness or remember his flight and orbit into outer space in 1962? How did it make you feel as an American?

Did you know that the Atlas rockets for this mission were created by Rocketdyne? That the testing of these rockets was performed in Santa Susana Field Labs? Read a nice article in the Daily News article by Greg Wilcox on John Glenn, Jr. and Rocketdyne team members, Ed Monteath, a former Rocketdyne vice president, now 98 and Engine test engineer Lee Solid who recall their work and interactions with Glenn HERE.

The engineering might of Rocketdyne has to be placed in perspective.  The Space Race that occurred in the 1960s placed a tremendous amount of pressure from Washington down to Canoga Park. All of these brilliant minds coming together to drive America to the finish line, in first place,, by placing men in space and ultimately to the moon and safely back to Earth in the same decade. What an achievement! 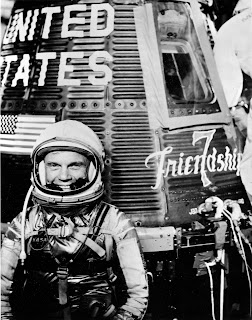 Astronaut John H. Glenn Jr., pilot of the Mercury Atlas 6 (MA-6) spaceflight, poses for a photo with the Mercury "Friendship 7" spacecraft during preflight activities. On Feb. 20, 1962, Glenn piloted the Mercury-Atlas 6 "Friendship 7" spacecraft on the first manned orbital mission of the United States. Launched from Kennedy Space Center, Fla., he completed a successful three-orbit mission around the earth, reaching a maximum altitude (apogee) of approximately 162 statute miles and an orbital velocity of approximately 17,500 miles per hour. Glenn's "Friendship 7" Mercury spacecraft landed approximately 800 miles southeast of KSC in the vicinity of Grand Turk Island. Mission duration from launch to impact was 4 hours, 55 minutes, and 23 seconds.

The launch and life of Col.John Glenn, Jr. 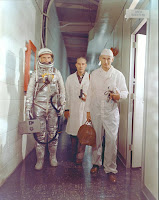 On Feb. 23, 1962, U.S. President John F. Kennedy pays tribute to astronaut John H. Glenn Jr. for his February 1962 flight aboard Friendship 7. The Mercury-Atlas 6 mission marked the free world's first orbital manned flight. Vice-President Lyndon Baines Johnson (for whom the Manned Spacecraft Center was later to be named), NASA Administrator James Webb and Glenn family members are among others also in the scene.

Have you ever been to a science museum and looked into one of these older space capsules?  Can you say "Guts of Steel?" With no guarantee of a successful flight and return, he splashed down a hero.

At age 77, he did it again by hopping a ride and offering himself up to research on October 29, 1998 aboard Space Shuttle Discovery. 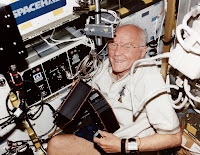 The Museum loves to salute the accomplishments of the aerospace and aviation industries from the San Fernando Valley. A lot of folks are quick to talk about the history and current state of entertainment and music, but the achievements in these fields are easily, if not ahead of these other  fields. It is truly mind-boggling on the advancements in technology during this decade.

And, for today, Rocketdyne continues to devise and bring to reality the rockets for missions to Mars and beyond.


Posted by Mike Stevens
Posted by The Museum SFV at 4:00 PM
Email ThisBlogThis!Share to TwitterShare to FacebookShare to Pinterest