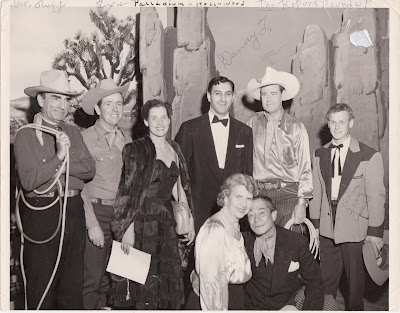 "Augie and Margie Gomez, sitting at a roping contest? Danny Thomas and other ropers."
left is George Rupp with rope, Tex _______,  young man at right is (illegible Mc Gerwie) Joey.  The event, called the Ropers Round Up, was held at the Palladium in Hollywood.

"There are a number of articles regarding my father and our family in the archives of the Daily News/green sheet or LA Times. After my parents were married they moved to our home in Van Nuys, that was 1939. Back in those days my parents were active in the Grange, and other community activities. They collected clothing and other items for the Navaho Indians, this was back when I was a young girl.


My father's name was Augie Whitecloud Gomez. He also has some information in  www.imdb.com, you can type in Augie Whitecloud Gomez and find some of the movies etc, he was in, mostly as an extra but in his younger days he was a stunt man.  In the Los Angeles Times San Fernando Valley Section Sunday Morning April 27, 1958 there is a whole page about my dad with my sister and I. I have a copy but I can't scan it because of its size, won't fit in the scanner. I have tried to find it in some kind of newspaper archives but no luck. So if you know of any way to find it I sure would be grateful.


In his younger days, he traveled with Tex Ritter and was in a group of friends who worked with Tom Mix. When I was younger my family would visit with Tex Ritter and his family, who at that time lived in the valley. Director/actor John Derek came to our home to learn how to throw knifes. Also when Ron Howard was young he and his family came to our home to learn how to use a rope. Dad was in a number of westerns with John Wayne.

Chief John Big Tree who was in many of John Ford movies, would stay with us when he did come from the Onondaga Indian Reservation in NY. You can check out Uncle Big Tree's info on line.

Dad was friends with Jim Thorp. When my sister was very young they and Jim Thorpe help sell war bonds during WWII.  We would go on set with him when he did TV western, Gene Autry, Roy Rogers, Hopalong Cassidy and Cisco Kid. My family would do different fairs, shows etc., mostly when we were young kids.

Also he owned a Leather Store, I think it was called Sherwood Leather store or something like that, near Woodley and Sherman Way.  He made boots, did leather tooling, made scrip covers for directors and any other leather products. He also made all his Indian regalia for my sister and myself. He worked with Order of the Arrow Scout group who would go to many fairs and made their own regalia. They also worked at Corriganville in Simi Valley.           Gerrie 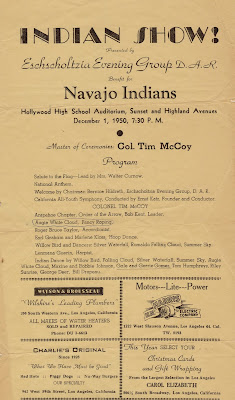 Circled are the names of Augie White Cloud (fancy roping)


and Gale and Gerrie Gomez in an Indian Dance by Yellow Bird. 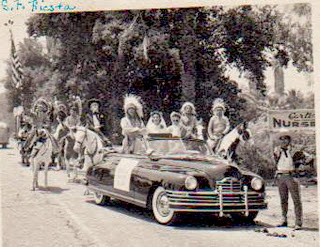 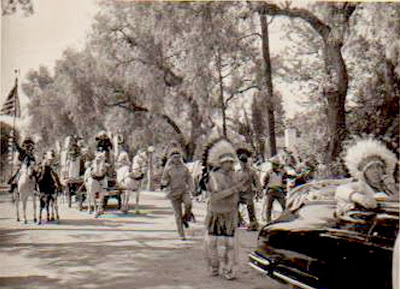 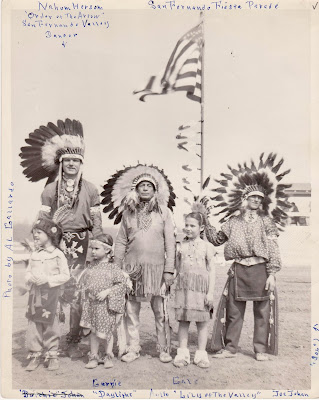 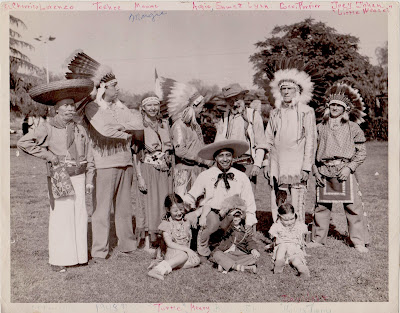 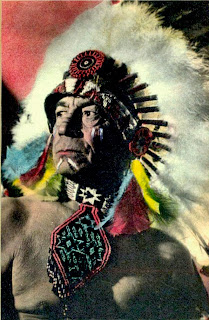 Hello Gertie
I wonder if you remember me?
I lived on Wyandotte and Gothie in Van Nuys
My name was Lillian Schumacher
Mother was Ruth. Father was Charles but was was called Chick
Your Dad Auggie made a belt and a shoulder purse with matching coin purse.
I still have both of them. Also have some photos of you and Gale with me
You can reach me at
bleaster1976@gmail.com
Hope to hear from you
Best wishes
Lillian “Lil”

I wrote Gerrie. Not Gertie

Hi Gerrie,
Your dad took my uncle Tommy Fiorito under his wing and named him- Neewa Kusadas, which we put on our uncle's headstone. We would love to visit the memorabilia should it go on display again. Perhaps we can touch base?
Best,
Viola