VAN NUYS BAPTISTS ONCE HAD A FAMOUS CHOIR

At one time, the Van Nuys community celebrated the Christmas season in a big way. There was a very popular "Nativity Christmas Parade" in which nearly of the area's Christian churches participated with festive floats. Each float depicted a different part of the life of Jesus. Catholics almost always featured a float about the Annunciation to the Virgin Mary.
By the late 1970s, the First Baptist Church, under the leadership of Rev. Jess Moody, had grown into one of the most powerful religious organizations in the Valley (it remains such today in its new location in Porter Ranch and under its new name Shepherd of the Hills church. The church no longer maintains a large adult choir. 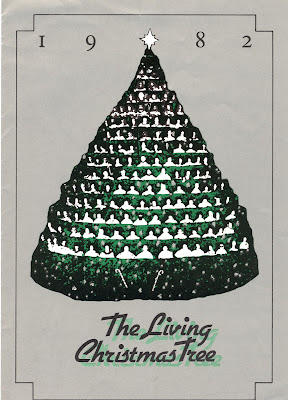 December 13, 1982 - Program for The Living Christmas Tree - Gift to The Museum of the San Fernando Valley from Gary Fredburg 2012  (click on image to enlarge it.)
Posted by Gerald R. Fecht at 2:46 PM
Email ThisBlogThis!Share to TwitterShare to FacebookShare to Pinterest
Labels: 1982, First Baptist Church of Van Nuys