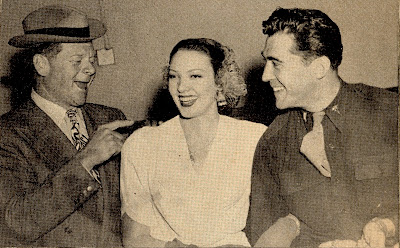 
In the 1940s, radio was the chief way Americans got their news and daily entertainment.  Al Pearce (at the left) was widely known by his character-name "Elmer Blurt".  Linda Darnell had just burst into stardom in her 1940s role in Song of the Islands. The film was shown often aboard US Navy ships and on military bases in the South Pacific. She was part of many a young serviceman's fantasies of what their battle torn islands could someday be like. With Pearce and Darnell was Harold Bostwick who went on to work in Broadway productions in New York.
"Al "Elmer Blurt: Pearce, Linda Darnell and Lt. Harold Bostwick, theatre officer, cook up a few quips for the usual Wednesday night fun-fest."
Posted by Gerald R. Fecht at 9:22 AM