NORTH HOLLYWOOD PARK - A PRINCE OF A PLACE 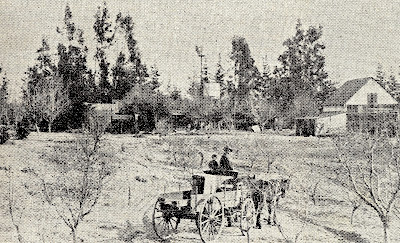 In 1890, when the Lankershim Water and Development Company divided its San Fernando Valley lands into ranches for growing fruit, Alfred and Harry purchased 200 acres. The Princes were among the first pioneer American families who settled in the Valley. With the promise of Owens River water, the Princes planted their first fruit tree orchard. Like NoHo actors today, the Princes took secondary jobs until the trees matured. Almost a decade passed began to make money on North Hollywood produced fruit.
In 1909, Harry and Alfred Prince began drying their own produce and fruit from other ranches in the Valley. Soon great drying racks appeared on their lands.
In 1927 North Hollywood citizens began an effort to create a great park for their community. The land originally had 93 acres but much was lost during the construction of the divisive extension of the Hollywood Freeway north.
Emma Prince, Alfred’s widow, stated in 1971 that the stately eucalyptus trees that still stand in North Hollywood Park were there when the Prince brothers purchased the land.
The Museum of the San Fernando Valley’s walking tour of historic NoHo, begins at the statue of heroic Amelia Earhart in beautiful North Hollywood Park.