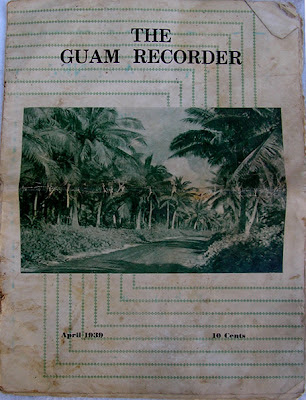 Few American artifacts remain from the Japanese occupation of the Island of Guam in World War II. This newspaper, now in the Veterans Collection of the Museum of the San Fernando Valley, was published in April, 1939. It was brought to California as a souvenir by James Fecht, who acquired it during his time in a US Military Hospital on the Island.   Guam was captured by the United States during the Spanish American War on June 21, 1898. The island was exceptionally valuable, due to its convenience as a "way station" for US commercial and military ships traveling the Pacific Ocean. Guam was invaded and captured by the Japanese military on December 7th, 1941.   James Fecht was a high school boy at St. Brendan School in Mexico, Missouri, when he and his classmates heard about the Japanese attack on Pearl Harbor and the Island of Guam. Both places were unknown to the boys, who as young men would find themselves all too soon in the life and death struggle between the United States and Japan.   James Fecht, a United States Marine, was severely burned during a mopping-up operation at the end of the Battle of Guam.
Posted by Gerald R. Fecht at 8:07 PM