DISCOVERING OUR VALLEY    2011
Among the wonderful photographs given to The Museum of the San Fernando Valley by Jean Putney in October of 2011 is this promotional photograph of the Original Beverly Hill Billies. Though the picture is not dated. it is likely to be from the early 1940s.  Earlier this year Porky Johnson, one of The Museum's oral history subjects, referred to the Beverly Hill Billies when he talked about the musical group, The Sons of the Pioneers and cowboy film star Roy Rogers, and the song writer Bob Nolan. 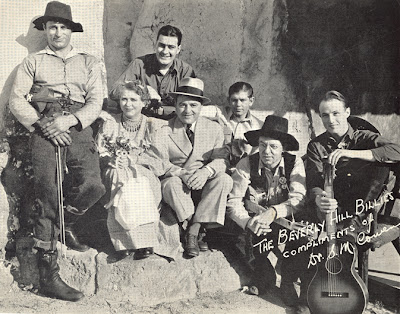 The Original Beverly Hill Billies - Gift to The Museum of the San Fernando Valley from Jean Putney 2011.  Man, with black hat and guitar, second from the right is likely Bob Nolan.  Nolan was the author of two of the most popular songs in America in the 1940s and 50s, "Cool Water" and "Tumbling Tiumbleweeds."  (click on image to enlarge)   Refer to photo  4029
Posted by Gerald R. Fecht at 12:26 PM

Hi, just saw this photo and thought I might clear up some of the misinformation. The Beverly Hill Billies were popular radio performers in the early to mid 1930s. The fellow with the hat is Aleth Hansen, aka "Lem H. Giles, H.D." [horse doctor]. The others have hillbilly names such as Zeke, Ezra, etc. The one who went onto greatest fame is the young man in the back, third from the right: Elton Britt. At no time did Bob Nolan have anything to do with them.

In the interests of accuracy, Bob Nolan admired the Beverly Hill Billies but he was never a member. For more information, contact music historian Larry Hopper: larryhxl11@optimum.net or visit his web page on the Bob Nolan website: http://bobnolan-sop.net/Reflections/Reflections%20htms/Hopper,%20Larry.htm