FABULOUS COLLECTION GIVEN TO THE MUSEUM - OLYMPE BRADNA

DISCOVERING OUR VALLEY      2011
A major collection of San Fernando Valley-related motion picture and animal training photographs has been donated to The Museum. To be known as the Putney Collection, the materials are a significant addition to The Museum's emerging San Fernando Valley Entertainment Industry History Library. Here's an example of two rare photographs in this exciting collection. 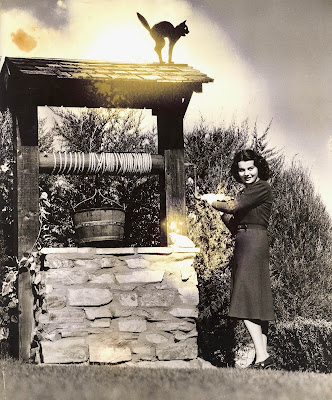 Olympe Bradna - actress 1939 - photo gift to The Museum from J. Putney 2011.
"A STAR AT HOME - It's fun to work in pictures, but it is also fun to stay at home when one has a San Fernando Valley ranch similar to Branda's. Paramount's French star, who recently completed "The Night of Nights," relaxes happily in the thought that the landscaping and gardening of her home was done with only the help of her father."
The film, The Night of Nights was completed in 1939. 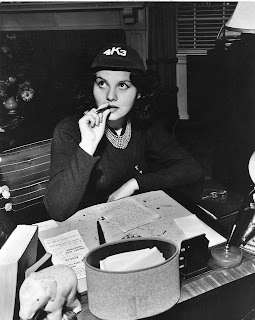 Olympe Bradna - actress 1939 - photo gift to The Museum from J. Putney 2011.
"COLLEGE DAYS   --  It was no so many weeks ago that an unnamed student at the University of Kentucky presented Olympe Bradna with his class cap. The occasion was the University of Georgia football game at Louisville where the Paramount star was making a personal appearance in advance of her newest film, "The Night of Nights." Now in her San Fernando Valley home, Olympe answers her admirer's letters."