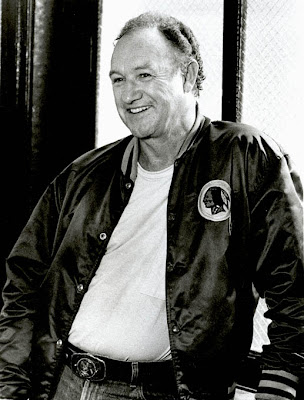 Gene Hackman - publicity photograph from the film Loose Cannons 0 Tri Star 1990 - gift to The Museum of the San Fernando Valley from Barbara Silva 2011.  (click on image to enlarge)
One of the most important film directors of the late 1930s and 1940s was Michael Curtiz. He brought the world some of the most exciting films of his era, including: The Adventures of Robin Hood, Captain Blood and the Sea Hawk. The music from these films are now regularly included in classical performances.  Curtiz lived in Woodland Hills.  After the director's death, the great actor Gene Hackman bought the two acre property and lived there for some time.
Posted by Gerald R. Fecht at 12:20 PM