Among the many treasures in the recently acquired Putney Collection is this 1940 promotional photograph of Barbara Stanwyck and attached information statement. 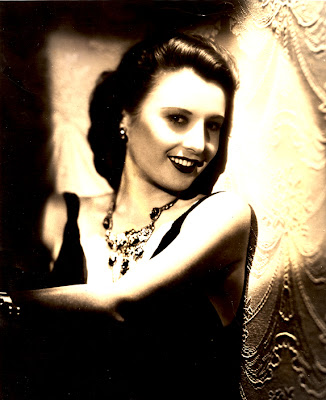 Barbara Stanwyck promotional photograph - 1940
Gift to The Museum of the San Fernando Valley from Joan Putney 2011.  (click on image to enlarge)


"BROOKLYN BOMBSHELL - Somehow, it seems, there's always a red-head from Brooklyn, somewhere in Hollywood. First it was Clara Bow, then Barbara Stanwyck came along. And, if Barbara ever chooses to step down and assume the home life of Mrs. Robert Taylor, there is Susan Hayward waiting to take up the laurels. Barbara, at present, is working opposite Fred MacMurray in Paramount's "Remember the Night." And she's celebrating her tenth anniversary as a screen celebrity. She's the despair of costume designers, and the delight of directors. For Barbara cares not a whit about her gowns and costumes; all she asks is a good part in a good picture, and it is to this uncanny knack of selecting top roles that she attributes her success.
Pictures like "So Big," "The Plough and the Stars,", "Stella Dallas," The Mad Miss Manton," "Union Pacific," and "Golden Boy." have stamped her as a versatile actress and an accomplished performer. But, it was not ever thus. Youngest of five children, she was placed in an orphanage when her mother died. Barbara went to public schools in Brooklyn and divided her yearnings between a dancing career and that of a missionary to China.
Eventually she took dancing lessons - after working in a department store - and worked up through night clubs to Shubert productions. Then Willard Mack put her in a small part in "The Noose," and Ruby Stevens became Barbara Stanwyck.  It was a combination of Barbara Fritchio and Jane Stanwyck.
She was a year - a hit in "Burlesque" (the play) and came to Hollywood in 1929. Less than a year ago, Barbara became the envy of a million women by marrying Robert Taylor. While she was working in "Remember The Night", he was working in "Remember" and just so they wouldn't forget, they bought a new home in Beverly Hills. But, she still has her horse ranch in the San Fernando Valley." 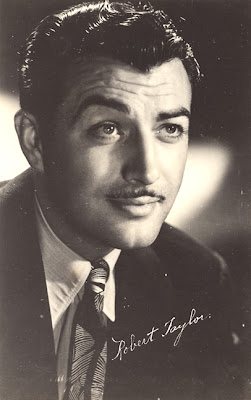 Robert Taylor - vintage postcard - Gift to The Museum of the San Fernando Valley from Gary Fredburg 2011  - (click on image to enlarge)
Posted by Gerald R. Fecht at 2:02 PM