THREE PHOTOGRAPHS FROM THE 1984 OLYMPIC GAMES

With the increased arrival of artifacts, books and photographs for The Museum's archives, the need for a workspace is more and more apparent. Today, for example many new treasures arrived from The Museum's commitment to the celebration of the 100th Anniversary of the founding of Van Nuys. Volunteers are champing to get started on many important Museum Community projects, and a physical workspace for them has become paramount in importance.
Liane Schirmer, Chair of the Museum's Committee to help out with the 230th Birthday of Los Angeles, regularly reminds me that we promised 230 images of the City on this blogsite before the all city celebration in September.
Here are three snapshots that I took of the 1984 Olympic Games at the Los Angeles Memorial Coliseum. They are part of The Museum's Olympic Games collection. 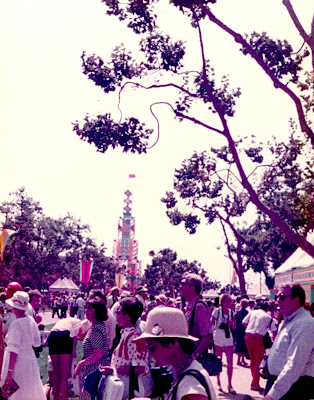 A crowd heads toward the Los Angeles Memorial Coliseum through Exposition Park in 1984. 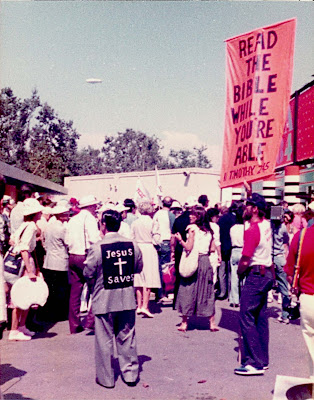 Just as their religious ancestors did in ancient Greek and Roman sporting events, these Christians sought converts among visitors to the 1984 Olympic Games in Los Angeles. No, that is not a flying saucer over the trees, but the Goodyear blimp.  (click on images to enlarge) 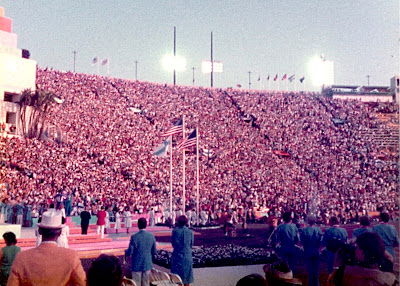 From our seats in the Memorial Coliseum, we saw the flags of the United States and Finland raised after a wonderful track and field event.
Posted by Gerald R. Fecht at 7:24 PM