DISCOVERING OUR VALLEY       2011
Recently, at the first videotaping in The Museum's "Narrating Lives - Oral Histories of the San Fernando Valley, I met Ms. Sue O'Hearn. who mentioned that she had written an article for her church's newsletter, about its history. I encouraged Sue to share her writing with The Museum Community.

Our History
"Ed Harness, a Southern Baptist missionary, had a dream which caused him to lead in the founding of a Baptist Mission in Granada Hills with a dedicated core group of 16 people.  On April 26, 1953 the mission organized as First Baptist Church of Granada Hills, called Willard Kelly to become its first pastor in July of that year and applied for membership in the San Fernando Valley Southern Baptist Association.  At the end of 1953 there were 34 resident members.
When Dale Aycock came to pastor the church in June 1955, the congregation was meeting in a small converted residence located where the present sanctuary now stands.  But that all changed when a new worship hall was dedicated in late 1956.  During this period the total membership hovered around 120 and Sunday school attendance was at an all time high.
The 1960’s were an all-round good period for the church.  Under the leadership of Howard Greer, a second new building with a kitchen was built in 1961, which is now used for the nursery and Head Start classes.  And the many revivals, citywide visitation, and outreach activities led the membership to reach 230 in 1965. 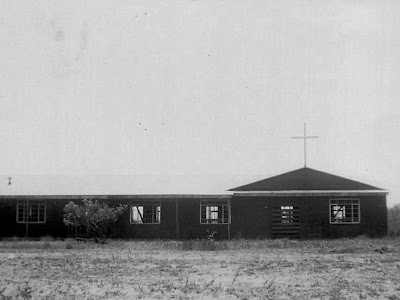 The Old Church Building - now used as a meeting hall.
The church experienced strong growth during the later half of the decade, as well, increasing the total membership to 446 and the Sunday school attendance to 212.  During Glenn Wood’s tenure as pastor, a choir of 35 filled the loft, ministry to local jail facilities was active, and there was a large youth contingency with activities that included retreats, snow trips, beach outings and in-home fellowships.
The current sanctuary was built during this period and was occupied the first Sunday of March, 1970, seating 350 people.  The white steeple on top of the church building has over the years served as a beacon to passers by and today remains a familiar Granada Hills landmark. 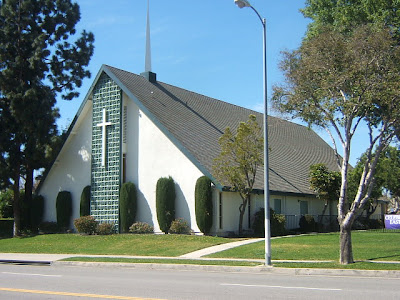 First Baptist Church of Granada Hills - present sanctuary
The 70’s, 80’s and 90’s were a period of remarkable pastoral stability at First Baptist.  Only two pastors, both fulfilling long tenures, shepherded the church during this time:   Dr. Ray Walker from 1971 to 1987 and Bruce Swetnam from 1987 to 1998.  Despite this stability, though, membership at First Baptist slowly declined over this period as Granada Hills and the San Fernando Valley became increasingly urban and interconnected.  By 1998 the average Sunday school attendance had fallen to 21 people.
Bret Capranica was called to be the pastor in September 1999.  Through Pastor Capranica’s giftedness in preaching and administration, the church’s attendance stabilized and the congregation was able to regain some of its lost momentum.   Additionally, First Baptist added a Spanish language ministry to its roster in December of 2000 when Rodolfo Lagos was brought on as an associate pastor.
Today, Granada Hills is no longer a quiet suburb with open land, orange groves, dirt roads, dairies and horse stables.  Likewise, First Baptist is no longer a large church bursting at the seams with recent Southern and Midwestern transplants.  Change, however, is always inevitable.  Under the present leadership of Pastor Eugene Curry, the congregation looks forward to the future, knowing that with God’s grace and the members’ support, First Baptist Church of Granada Hills will continue to grow in its ministry and service to the community."
-Sue O’Hearn
First Baptist Church of Granada Hills
11011 Hayvenhurst Ave.
Granada Hills, CA 91344
Posted by Gerald R. Fecht at 11:31 PM

Very interesting, thank you for your story.