DISCOVERING OUR VALLEY       2011
When The Museum voted Teddy the Beagle as our Mascot, none of us realized that we had a real star in our midst. We should have known great things were in store for Teddy when he won Number One 13-inch Beagle in 2010. Named Best of Variety at Monday's Westminster Dog Show in New York City, Teddy was edged out for Best in Hound Group by a Scottish deerhound, and will now return to the San Fernando Valley to become according to his owner Diana Lipari "a regular dog." Diana and her husband Richard Hilton (member of the Board of your Museum), will try to give Teddy a normal life. But, as those of us raised around show business, know that won't be easy. 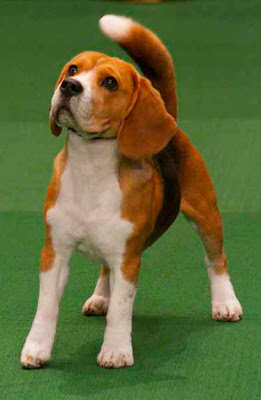 Read more about Teddy, the Mascot of The Museum in today's (Feb. 15) edition of the Daily News. Teddy's photo in on the front cover. The full story is on page A10.
Posted by Gerald R. Fecht at 12:27 PM

Email ThisBlogThis!Share to TwitterShare to FacebookShare to Pinterest
Labels: Teddy

Yay for a very cute and very winning beagle!

Teddy, your'e the best. Hope to see you at our next meeting.

I just heard Teddy interviewed on KPCC this afternoon by Patt Morrison and then found this blog. Small world...