The sheriff of Hollywood, California, once put saw horse barriers across Cahuenga Road to keep rowdy San Fernando Valley cowboys from coming into his sleepy little town on Saturday nights. The Cahuenga Pass is still a pretty rowdy place, but a long way from troubles caused by cowboys.
Today, I had the real pleasure of meeting Gaelyn Whitley Keith, great grand daughter of H. J. Whitley, the founding father of both the cities of Hollywood and Van Nuys in the heart of the San Fernando Valley. It was great fun meeting a member of the famous Whitley clan, especially on the 100th Anniversary of the founding of Van Nuys. (If for no other reason than the establishment of two such important communities, we feel that H.J. Whitney deserves to be recognized in the California Museum in Sacramento.) 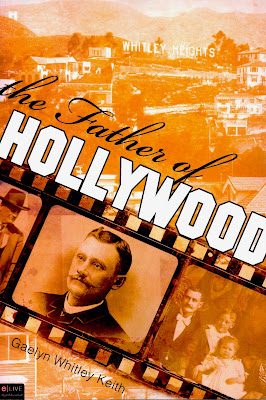 Gift to the Library of The Museum of the San Fernando Valley from Gaelyn Whjitley Keith February 26th, 2011.  (click on image to enlarge).
Posted by Gerald R. Fecht at 8:27 PM