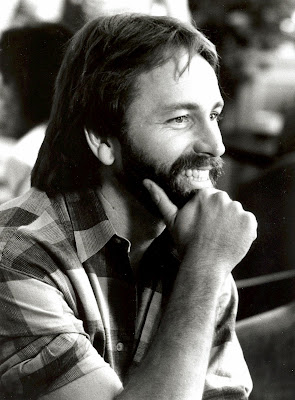 John Ritter - promotional photograph for the film "Skin Deep" - Gift to The Museum of the San Fernando Valley from Barbara Silva 2011 - (click on image to enlarge)
John Ritter was one of America's most beloved television actors. He is best known for his role as Jack Tripper in the comedy series "Three's Company".  John, the son of the cowboy actor Tex Ritter and Dorothy Fay, was born on the 17th of September 1948 in Burbank. He died in Burbank on the 11th of September 2003. His is buried in Forest Lawn in the Hollywood Hills, overlooking Burbank, California.
Posted by Gerald R. Fecht at 3:15 PM