DISCOVERING OUR VALLEY   2011
In September of 1987, when Pope John Paul 11 visited Los Angeles, he chose to rest from his hectic schedule within the serene confines of the Mission San Fernando Rey de España. Today in Rome, that Pope, once named Karol Wojtyla was officially beatified in an ancient ceremony before a crowd of over a million people. The world celebrates "blessed" John Paul II today as the great religious leader who helped bring down the rule over his native Poland by the Soviet Union.
It is fun for those of us who live in the San Fernando Valley to think that not only did the Supreme Pontiff of the Catholic Church rest in our Mission but also joined the world as an energetic tourist at Universal Studios. 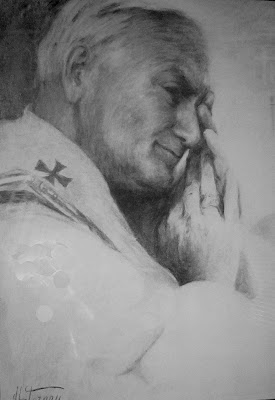 Image of John Paul II in the Parish Office of Our Lady of Grace Catholic Church in Encino.
Archives of The Museum of the San Fernando Valley - 2011  (click on image to enlarge)
Posted by Gerald R. Fecht at 6:39 PM