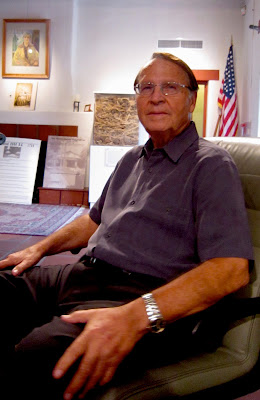 Guy Weddington McCreary at his interview for The Museum of the San Fernando Valley. Photo for the Archives of The Museum by Gerald Fecht 2011. (click on image to enlarge)
Guy Weddington McCreary was born and raised in the San Fernando Valley. He is a descendant of Wilson Weddington, the founder of North Hollywood (once called Lankershim). Guy attended Lankershim Elementary School and North Hollywood High School. His memories include the World War II era and observations of a Valley that experienced an explosion of growth during the 1950s and '60s. Among his significant achievements was being the Executive Director of the Republican Party for Los Angeles County in the 1970s.
As the president of the Campo de Cahuenga Memorial Historical Association, Guy McCreary was instrumental in saving and restoring the Campo for future generations.
Posted by Gerald R. Fecht at 4:39 PM