Phil Juska has just completed a terrific model of the San Fernando Valley’s treasure, Phil’s Diner. The model is 1:24 scale, 1/2 inch per foot. It's 15 inches long and 6 inches deep. The body and roof come off for viewing. 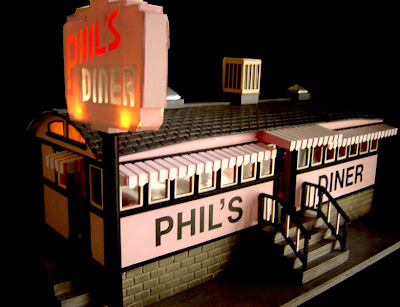 Marilyn Monroe plays the role of counter-girl. She serves coffee to the ultimate biker, Marlon Brando 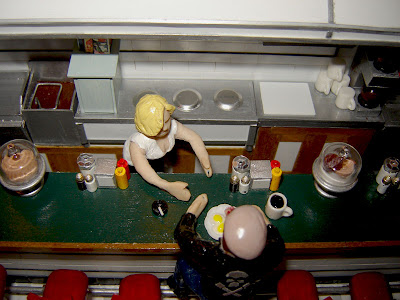 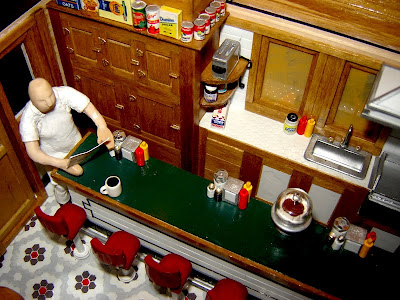 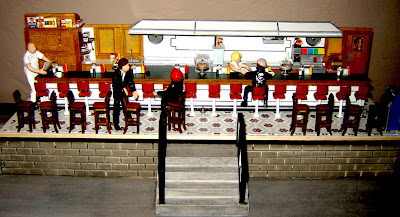 Here’s what the Philadelphia, Pennsylvania model maker has to say about his effort:
“I've finally finished my model of Phil's Diner in No. Hollywood. I'm sending along some pictures in a few emails. The waitress behind the counter is Marilyn Monroe, who grew up about 10 minutes from Phil's. I read online that Marlon Brando used to eat there, so I put him at the counter as his character from The Wild One, complete with his classic motorcycle cap and his gang's "skull and crossed pistons" logo on his leather jacket.”

“Since an episode of The X Files was filmed there, I put Scully and Mulder at one of the tables and the "Smoking Man" lurking in the kitchen window.

The cook at the end of the counter, reading Variety, by the way, is the current owner, Casey Hallenbeck. Everything in the model (except for the overhead lights, the coffee mugs and the food) is made from scratch. The sign lights up and the front and side pocket doors actually work.
Thought you'd enjoy seeing it.”
Phil Juska Philadelphia PA


The San Fernando Valley, in the heart of the Creative Capital of the World, deserves a great Museum of history and culture.
Posted by Gerald R. Fecht at 5:18 PM