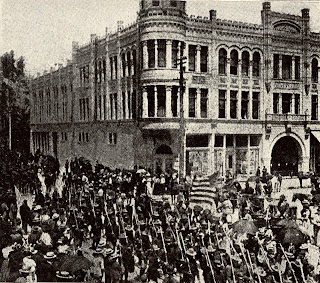 Marching off to war! Photo taken at 8th and Spring Street, downtown Los Angeles. The excitement of what Thedore Roosevelt called a "Bully Little War" brought out big crowds in 1898.

The history of American military veterans is a priority for The Museum of the San Fernando Valley. The history of wars goes much farther than medals and battle stories. Lives are not only at stake on the battlefields, but for decades after veterans return to civilian life.

"There are more than 50.000 Homeless Veterans in California and more than 21,000 of these veterans reside in Los Angeles"
April 2008 - Rand Corporation Study.