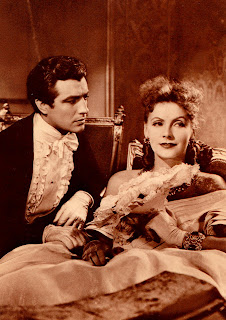 Directed by George Cukor, the 1937 block buster film Camille helped to launch the career of a young Robert Taylor. He played the role of a handsome Frenchman, Armand along side of one of most famous women in movie history, Greta Garbo.
Robert Taylor had a ranch home in Northridge. The actress Barbara Stanwick sold her nearby ranch property to the film star Jack Oakie, when she married Robert Taylor and moved into his home.

One of the most exciting projects scheduled by The Museum of the San Fernando Valley, beginning in 2009, is our list of Valley Notables. We will be identifying the places where famous San Fernando Valley residents have lived, but collecting their biographies, photos and memorabilia about their lives and careers.
If you would like to nominate someone like Robert Taylor to the Valley Notables list, drop us an email at
jerry@anchoreducation.com
Tell us your nominee, and leave your address and telephone number at which you can be reached.