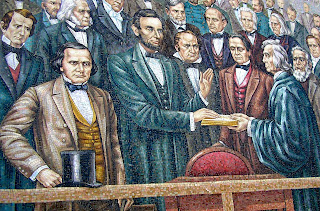 Mosaic of President Abraham Lincoln's oath of office - Forest Lawn - Hollywood Hills. Photo by Gerald Fecht for the Archives of The Museum of the San Fernando Valley (click on image to enlarge)

In nine days, Barack Hussein Obama will become the President of the United States of America. He will be administered the oath of office by the Chief Justice of the United States, John G. Roberts Jr. The President-elect has chosen to swear his loyalty to the Constitution of our Republic on the Bible used by President Abraham Lincoln for his inauguration in 1861. The Lincoln Bible is kept in the Library of Congress. It is bound in burgundy velvet with a gold-washed metal rim. Its edges are heavily gilded. The Bible was published by Oxford University Press.
Posted by Gerald R. Fecht at 7:28 PM