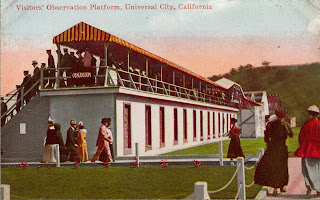 Viewing Platform at Universal Studios c 1912-1915. Historic postcard - gift of Gary Fredburg 2009 to the Archives of The Museum of the San Fernando Valley (click on image to enlarge)
2009 -
. The Year of Valley History
In the year 1912, Carl Laemmle extended his motion picture business to California. He purchased property once owned by the Lankershim Land and Water Company, at the edge of the Los Angeles River and began making movies right away. He named his San Fernando Valley based operations, Universal City.
The sight, where Universal Studios stands today, was so useful for film making, that between 1914 and 1915, Laemmle moved his headquarters and main studio productions to the Valley.
The cinema-going audience has long been fascinated with how films are made, and Carl Laemmle knew a good thing when he saw it. Platforms were strategically placed around Universal Studios. This was the ancestor of the world famous Universal Studios Tours of today.

The San Fernando Valley, in the heart of the Creative Capital of the World, deserves a great Museum of history and culture.
Posted by Gerald R. Fecht at 8:02 AM

Email ThisBlogThis!Share to TwitterShare to FacebookShare to Pinterest
Labels: 1912, 1914, 1915, UNIVERSAL

1912 Universal City, Oak Ranch, was located in the Valley at Forest lawn. Universal Ranch was the Nestor Studio Ranch. After Universal City moved to Lankershism, the ranch became the Lasky ranch