On January 21, 1813, John C. Fremont was born. His destiny would take him across a largely unexplored North American continent and into Norte California, a province of Mexico. Fremont would engage Mexicans and Californianos, and eventually establish the dream of America's "Manifest Destiny" in a small adobe building that today we call Campo de Cahuenga. Fremont would go on to be the first Republican candidate for the Presidency of the United States, become a competitor to an inexperienced young politician from Illinois, Abraham Lincoln, and a general in the Union Army in the Civil War. 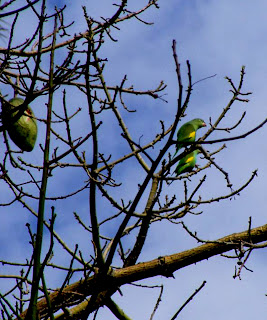 Nothing says January in Los Angeles better than wild parrots in your garden. Thanks to Phyllis Hansen, member of the Board of Directors of The Museum of the San Fernando Valley, for sharing her photograph.

The San Fernando Valley, in the heart of the Creative Capital of the World, deserves a great Museum of history and culture.
Posted by Gerald R. Fecht at 2:42 PM