THE BOOGIE WOOGIE BUGLE BOY AND THE SAN FERNANDO VALLEY


When "Swing" music swung into World War II, America had an additional psychological weapon that our enemies did not. While the Nazis burned books and goose stepped, American, Canadians, British, Australians and New Zealanders had jazz, and a sense of freedom even their older generations did not have. The role that swing music played in the war is hard to measure. The photographs in this blog collected by Ralph Mazzillo Sr. reflect a generation that knew that the bugle boy who played taps was also just as capable of swinging out. 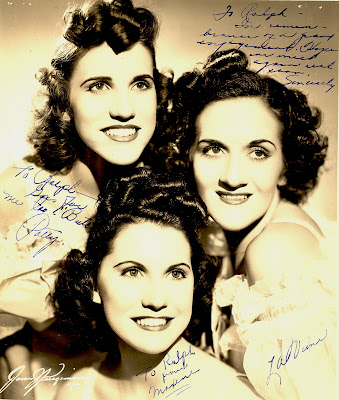 (right)  "To Ralph. In commemoration of a grand engagement. Hope we meet again soon. Sincerely LaVerne."  (top) "To Ralph, goes for me too! (unreadable "Butch" - Patty.  (bottom) "To Ralph from Maxene."   Photo in the collection of Ralph Muzzillo Sr. - courtesy of his son Ralph Jr. 2013.
Posted by Gerald R. Fecht at 12:39 PM