DISCOVERING OUR VALLEY   2011
Miquel Serra y Ferrer, founder of the California Mission System, was born in Majorca Spain in 1713. He took the religious name Junipero, in honor of Saint Juniper an early follower of Saint Francis Assisi.  Fra Junipero Serra became a missionary of the Order of Friars Minor (OFM), the Franciscans. He served his church in Spain, Mexico and eventually in Baja and Alta California. From his headquarters in the Mission San Carlos, his oversaw the Catholic Missions of California, including the Mission San Fernando Rey de España in Mission Hills. He died in 1784. 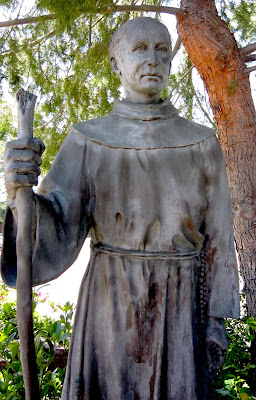 Statue of Blessed Junipero Serra in the gardens of Our Lady of Grace Catholic Church in Encino, California. The first parish church of Saint Charles Borromeo in North Hollywood (now the parish hall) was modeled on the Mission Church of San Carlos when Fra Junipero Serra is buried.  (photo by Gerald Fecht for the archives of The Museum of the San Fernando Valley 2011)
Posted by Gerald R. Fecht at 6:17 PM