DISCOVERING OUR VALLEY   2011
Recently, while Richard Hilton was leading The Museum's historic walking tour in North Hollywood, one of the in-tourists in his group exclaimed while looking across Lankershim Avenue, "Oh that is where we saw Jay Leno riding on his motorcycle."  When this autobiography of Jay Leno, "Leading With My Chin" was contributed to The Museum's growing Library of San Fernando Valley Entertainment Industry History, I thought about the many men and women who work at the television and film studios around us whose talents, like the great Jay Leno, are making Valley history today. 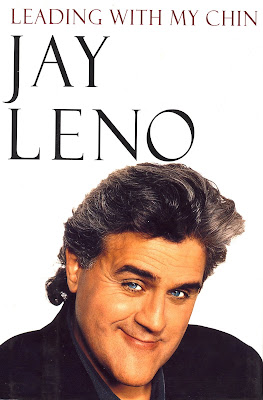 Jay Leno, like the pioneers of television whose statues grace the courtyard of the Academy of Television Arts and Sciences in the NoHo, are essential to the fabric of the Valley's  history and culture. Perhaps one day in the near future, The Museum of the San Fernando Valley might just display one of Jay's iconic motorcycles along with his story. In the meanwhile, Leading With My Chin is a very nice addition to our Library.
Posted by Gerald R. Fecht at 8:55 AM

I always see Leno riding or driving in the east valley