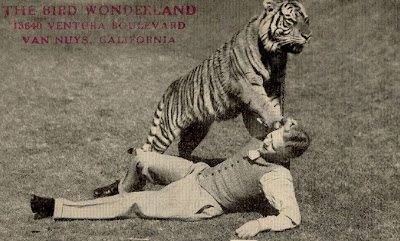 Satan, the Wrestling Movie Tiger - historic postcard - Gift to The Museum of the San Fernando Valley from Gary Fredburg - 2008 - presented here without caption.

Mr. Barry Balin of Woodland Hills, an important collector of historic paper goods and expert on vintage postcards, has asked his Museum to share information about Bird Wonderland of Van Nuys. He is interested in knowing more about Jackie the Wrestling Lion who was once part of Bird Wonderland of Encino/Van Nuys.
We don't have any images of Jackie, but we can share our image of "Satan" the Wrestling Movie Tiger. Jackie, by the way, may be the introduction lion image still used on Metro-Goldwin-Mayer films.

The man with the tiger is Coulson B. Glick, owner of Bird Wonderland.
I am his niece and walked Satan on a chain along Van Nuys Boulevard when I was twelve years old.

I am a great great nephew of Coulson's. Coulson's father, Harry, was my great grandmother's (Rose P. Glick Jaques) brother. I remember many stories from my father about Coulson and his birds and animals. We visited Coulson and Lucile at their home in California when I was a young boy in 1959.
Eric Ross Jaques
Bisbee, Arizona