CONGREGATIONAL CHURCH IN NORTHRIDGE - A DESIGN TREASURE BY A. QUINCY JONES 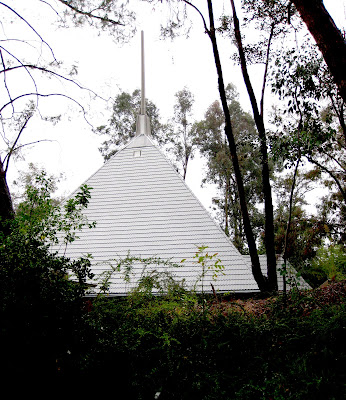 Congregational Church of Northridge - October 2009 - Photo by Gerald Fecht for the Archives of The Museum of the San Fernando Valley. The world famous architect A. Quincy Jones designed this Northridge treasure. 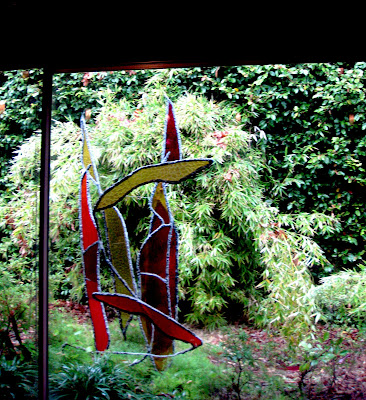 Spires of glass give tribute to European stained glass traditions.
Despite the October rain outside, the Church is warm and inviting,

In 1961, with the aid of its parent Congregational Church of the Chimes in Studio City, a community of San Fernando Valley residents established the Congregational Church of Northridge. With a shared interest in the arts, the new church group secured the architectural services of A. Quincy Jones.
A leader in the creation of important architecture in Southern California, Jones planned a religious sanctuary devoid of traditional symbolism, but a structure that reflected the beauty of its Northridge hillside and allowed great shafts of natural light to illuminate the building and the spirits of those who were to worship there.
As the congregation became more traditional, religious symbols began to appear and homage to an older heritage entered the building. Practical additions of office space and storage rooms arrived, but the building stays essentially true to A. Quincy Jones’ vision.
Your Museum, in our efforts to support the Northridge 100 celebration will be asking Pastor Roger Barkley and his congregation to support our overview of religion in Northridge with a history of the building and the community it nurtures.
Congregational Church of Northridge
9659 Balboa Boulevard
Northridge, CA 91325
telephone 1 (818) 349-2400

Parties interested in assisting The Museum of the San Fernando Valley to acquire Northridge religious history and artifacts such as photographs and anniversary books, are asked to telephone: 1 (818) 347-9665
Posted by Gerald R. Fecht at 11:13 PM

I grew up attending this church as child with my family. I was always awestruck by the sanctuary and the exterior architecture. It was always my preference to remain in the sanctuary during the sermon rather than report to Sunday school with other kids my age. Sometimes I got my wish, sometimes I didn't.

Almost as much as the Sanctuary, I enjoyed the adjoining hillside stream and tall stand of eucalyptus trees. Even today, the aroma of those trees brings back strong memories of church. Are those trees still there?

I did not know about the history of the Church and its architect. Thank you for providing this website.